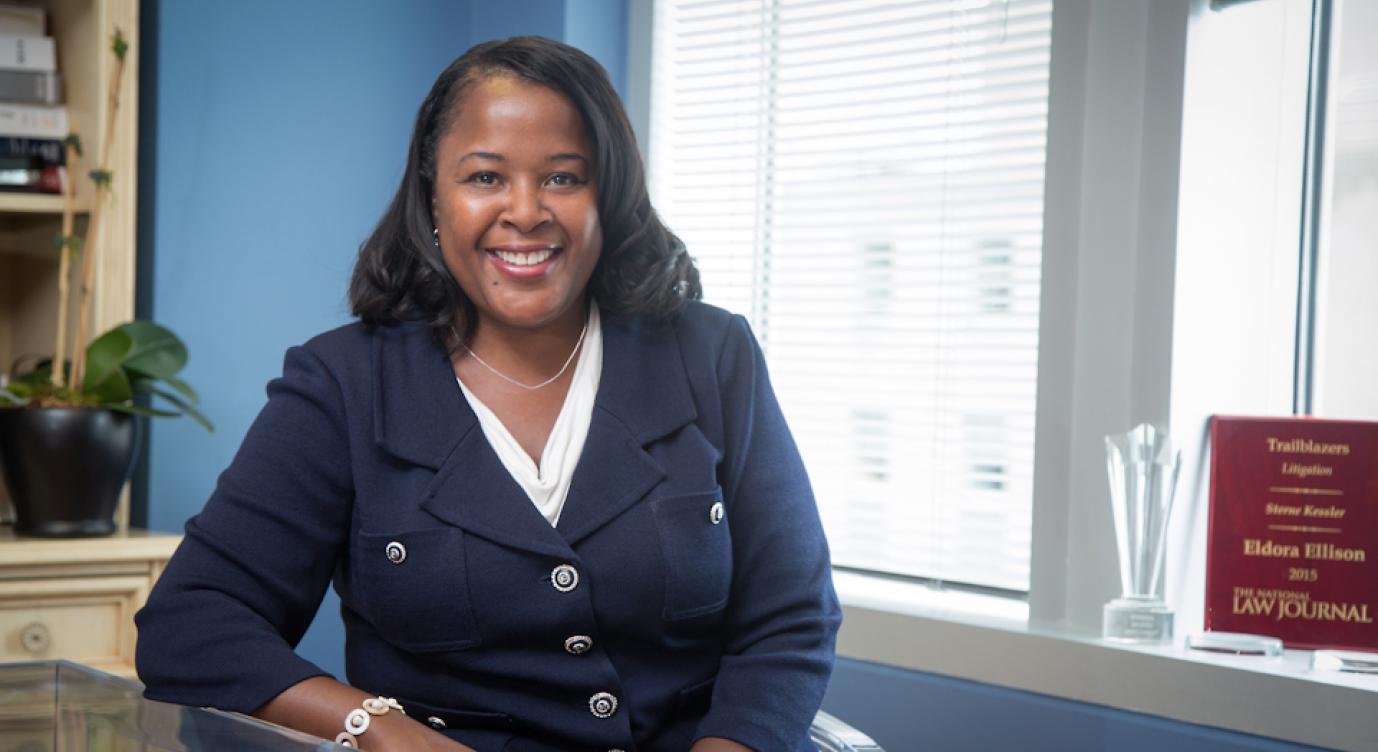 The 2021 IAM Patent 1000 heralded Eldora as “one of the nation’s foremost post-grant proceedings authorities” who “burns brightly as an all-round patent strategist.” She was inducted into the LMG Life Sciences Hall of Fame in 2021.

Eldora L. Ellison, Ph.D., is a director in Sterne Kessler’s Biotechnology & Chemical and Trial & Appellate Practice Groups. Eldora is a co-chair of the firm's Patent Office Litigation Practice. Over the course of her 28-year career, Eldora has gained extensive experience in inter partes patent matters, building on a strong foundation in patent prosecution. Her experience includes representing clients in over 70 inter partes review and post-grant review proceedings, more than 15 patent interferences, and in various patent reexaminations and district court litigations. For example, Eldora was lead counsel on behalf of patent owner ImmunoGen in Phigenix v. ImmunoGen, 845 F.3d 1168 (Fed. Cir. 2017), in which the Federal Circuit — for the first time since the Court’s inception — established the legal standard for demonstrating standing in an appeal from a final agency action. The Court subsequently dismissed Phigenix’s IPR appeal for lack of standing. More recently, Eldora was designated to lead patent strategist for the University of California on its ground-breaker CRISPR technology, and Eldora has led the University's renewed interference proceedings. Eldora’s practice also includes preparing and prosecuting patent applications; evaluating patent portfolios (e.g., for due diligence analyses, invalidity, non-infringement, or freedom-to-operate); counseling clients on intellectual property strategy, including Hatch-Waxman issues; and resolving inventorship disputes. She represents a variety of types of clients, including large multinational corporations, start-up companies, and not-for-profit organizations.

Eldora’s intellectual property experience has been principally in technical areas such as biotechnology, pharmaceuticals, molecular biology, therapeutic methods, diagnostic assays, analytical instruments, immunology, virology, bacteriology and vaccines. But she is also called upon to represent clients in other technical areas, given her specialized legal expertise.

Eldora has been recognized as a leading practitioner in the life sciences, and she has served as an expert witness on patent matters. After receiving LMG Life Sciences’ “Post Grant Proceedings Attorney of the Year” award in 2017 and 2019, Eldora was inducted into the organization’s prestigious Hall of Fame in 2021. Managing Intellectual Property nominated her for its "PTAB Litigator of the Year" award, and it has named her an "IP Star" in 2022 for the tenth year in a row, while also including her in their "Top 250 Women in IP." The Legal 500 recognized Eldora as a "Leading Lawyer" since 2020 and a "Recommended Lawyer" in 2018 and 2017 for U.S. reexamination and post-grant proceedings. In 2018, she also received the Haverford College Alumni Distinguished Achievement Award for outstanding contributions to her field. The National Law Journal recognized her as one of its "Top 50 Litigation Trailblazers." Law360 named her an "MVP in Life Sciences" in 2015. LMG Life Sciences nominated her for its "Patent Prosecutor of the Year" award as well as "PTAB Litigator of the Year" in 2016, and it has named her a "Life Sciences Star" since 2012. Profiles in Diversity Journal listed her among "Black Leaders Worth Watching" in 2020 and "Women Worth Watching" in 2016. In 2016, IAM Patent 1000 named her as one of the world's leading patent professionals and "highly recommended" for post-grant procedures and litigation. Eldora has often been quoted in publications such as IPLaw360 and The Washington Post for her analyses of developments in patent law.

Eldora has served as an advisor to associates participating in the PTAB’s Legal Experience and Advancement Program (LEAP), which provides associates with training and development opportunities in PTAB proceedings, including oral argument.

Eldora is a contributing author of Patent Office Litigation, Second Edition, published in 2017. Additionally, she is an editor of Patent Office Litigation, a two-volume set focused on the new contested proceedings under the America Invents Act, published in 2012 by Thomson Reuters Westlaw. This book examines how the proceedings interact with other aspects of patent procurement and enforcement, and it delivers practical analysis and advice.

She lectures and publishes frequently on topics such as the America Invents Act, patent interferences, patent reexaminations and concurrent patent litigation, and patents and licensing. Eldora has also served on the faculty for the District of Columbia Bar's Continuing Legal Education Program.

Eldora earned her J.D. from Georgetown University Law Center and her Ph.D. in biochemistry, molecular and cell biology from Cornell University, where she serves on the Board of Trustees. Eldora holds a B.S. in biology from Haverford College.