Consistency at the PTAB

The Patent Trial and Appeal Board (PTAB) implemented a number of measures designed to increase the consistency and predictability of panel decisions in the second half of 2018. These measures included the establishment of the PTAB Precedential Opinion Panel (POP) and the first update to the PTAB Trial Practice Guide (TPG) since its creation in 2012. 2019 was the first full year with these new measures in place. The United States Patent and Trademark Office (USPTO) implemented these measures primarily to increase predictability at the PTAB. But did they actually increase predictability? Based on an analysis of PTAB decisions, we conclude that the PTAB is becoming more consistent and paying close attention to precedential PTAB decisions and TPG updates.

Laying the Consistency and Predictability Groundwork

In September 2018, the USPTO created the POP, which began rendering opinions in 2019. One of the POP’s purposes is to “establish binding agency authority concerning major policy or procedural issues, or other issues of exceptional importance.”1 The PTAB has also stated that the POP is intended to “resolve conflicts between Board decisions, to promote certainty and consistency, or to rehear any case it determines warrants the Panel’s attention.”2 In addition to decisions rendered and designated as precedential by the POP, the PTAB also can receive nominations for “a routine decision of the Board for designation as precedential.”3 These nominations are initially screened by a “screening panel,” which includes the POP members and other Administrative Patent Judges (APJs), and then if chosen for consideration by the panel, forwarded to a five member “Executive Judges Committee,” which makes the final determination as to whether the decision should be recommended to the Director for precedential designation.4 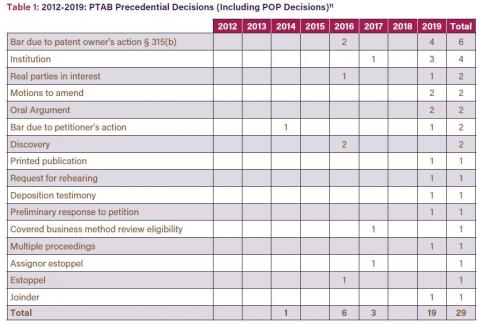 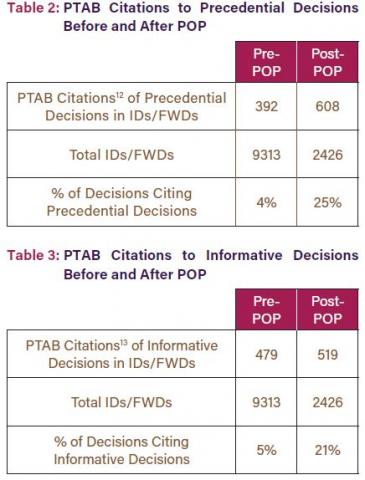 As shown in Table 2 above, in the five and a half years prior to the POP (from January 2013 to August 2018), only 392 out of 9,313 institution and final written decisions cited to precedential PTAB cases. But post-POP (from September 2018 to December 2019), 608 out of 2,426 institution and final written decisions have cited to precedential PTAB decisions. An obvious explanation for the increase in citations to precedential and informative decisions is that, as explained above, there are substantially more of them now. But regardless of the reason, any increase in citations to precedent indicates that PTAB panels are likely becoming more consistent. And likewise, this also indicates that practitioners are becoming better informed on these critical issues.

Moreover, a large discrepancy exists in citation rates pre- and post-POP. While there were roughly three-times as many precedential decisions at the end of 2019 compared to prior to the POP’s establishment in September 2018, significantly, the post-POP citation rate is roughly six times the pre-POP rate. This clearly indicates that the PTAB is citing more frequently to precedential cases in 2019. One caveat is that the above tables include citations to decisions both before and after their designations. But a closer look at the data reveals that the PTAB is generally more likely to cite precedential and informative decisions after their designation. We examined the ten most-cited precedential PTAB decisions, and the results below in Table 4 show a general increase in citations to these decisions after their designations. Particularly for cases dealing with discretionary matters under § 314(a) and § 325(d). Indeed each of the three most frequently cited cases deal with one or both of these issues.14

Turning now to the Trial Practice Guide (TPG), the PTAB has also recently sought to promote panel consistency through the TPG’s August 2018 and July 2019 updates.15 The August 2018 Update states that the TPG is intended to (1) “apprise the public of standard practices before the Board;” and (2) “encourage consistency of procedures among panels of the Board.”16 But did the updated TPG actually increase consistency at the PTAB? We also reviewed data as to how the PTAB utilizes the updated TPG in its decisions. At first blush, the results were unremarkable. But a deeper analysis, as we show below, reveals a more complex picture.

At a high-level, the data shows that the PTAB cited to the TPG slightly more often before the August 2018 Update (27%) than after the 2018 Update (23%), which tends to suggest the PTAB may not be making much more use of the 2018 and 2019 updates as compared to the previous TPG. But upon closer examination, the data reveals that these results are skewed by an initially high TPG citation rate that dropped off dramatically after the PTAB’s first 18 months. In fact, the PTAB cited to the TPG in 79% of institution decisions in its first 18 months, but cited it in just 7% of institution decisions in the 18 months prior to the August 2018 Update. Thus, the 23% TPG citation rate since the August 2018 Update represents a significantly increased rate compared to the prior 18 months before the 2018 Update. And the citation rate has increased even more since the July 2019 Update. The PTAB has cited to the TPG in 32% of institution decisions since July 2019, compared to 19% between August 2018 and July 2019. This shows that the Board is increasingly relying on the TPG again, and appears poised to continue to do so. 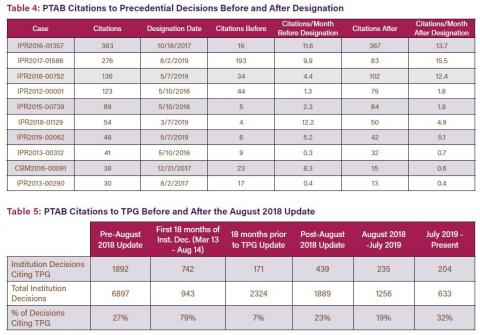 We recognize that reviewing citations is not a perfect method of measuring PTAB consistency. There are certainly other explanations for why the PTAB has increased citations to precedential PTAB cases or the TPG in some instances. However, given the magnitude in the increase of decisions that are now relying on citations to precedential decisions, hard evidence exists that the PTAB is becoming more consistent. Regardless, it is clear that the PTAB is paying close attention to precedential designations and TPG updates, and is increasingly using this new guidance to adjudicate difficult disputes in a more consistent manner.