Success of Motions to Stay Rising, But Why?

However, since AIA-contested proceedings began in 2012, stay rates have generally trended upward with significant increases over the last two years (11% for all motions, 12% for contested motions). These increases appear at least in part tied to the all-or-nothing institution approach required under the SAS decision3 and the PTAB’s adoption of the Phillips4 standard for claim construction. Indeed, in those courts handling the most patent litigation cases, stay rates are significantly higher. Notably, in the district courts of Delaware, Eastern District of Texas and Northern District of California, stay rates in 2019 were 70%, 73%, and 89%, respectively. Perhaps even more intriguing is the reliance on SAS and the claim construction change by some courts in 2019 to grant stay requests prior to institution of an AIA-contested proceeding.

In determining whether to stay a case pending an AIA-contested proceeding—inter partes review, post-grant review, or covered business method review—district courts generally consider three factors: (1) whether a stay will unduly prejudice or present a clear tactical disadvantage to the nonmoving party; (2) whether a stay will simplify the issues at trial; and (3) the stage of the District Court case, for example, whether discovery is complete and whether a trial date has been set.5

Since the inception of AIA-contested proceedings in 2012 through 2019, the grant rate for a district court motion to stay has slowly increased to 74% of all filed (both contested and uncontested) motions, as shown in the below table.

Contested motions for stay follow a similar trend line and have slowly increased to 53% since 2012. 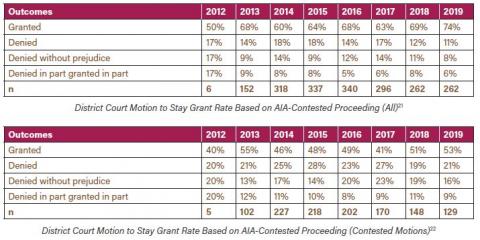 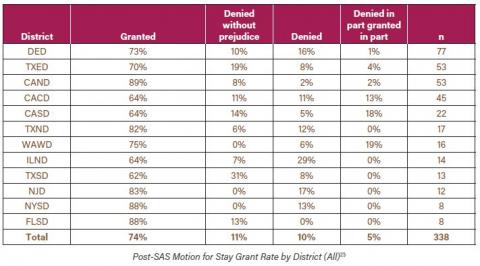 What is Driving the Recent Uptick in Stay Rates

As shown in the above tables, over the last two years stay rates for all motions have increased by 11%, while contested stay rates have increased by 12%. Many factors may contribute to this increase, such as more-timely motions, overwhelmed district courts, and/or more confidence in the PTAB by courts. But likely reasons for the increase over the last two years may be due to recent changes to PTAB procedures that provide district court judges additional comfort in their decision to grant a stay pending an AIA-contested proceeding.

First, in April 2018, the Supreme Court held that an AIA petitioner is “entitled to a final written decision addressing all of the claims it has challenged.”6 This overruled the prior practice of granting partial institution of IPR petitions, which allowed the PTAB to proceed with review on a subset of claims and/or invalidity grounds brought by the petitioner.

Second, in November 2018, the USPTO changed the claim construction standard applied by the PTAB in trial proceedings.7 This change replaced the “broadest reasonable interpretation” (BRI) standard used in the patent examination procedure with the Phillips standard used by federal courts to construe patent claims. The impact of this change only began to be felt in mid-2019, as explained by the Claim Construction Change article in the SKGF 2019 PTAB Year in Review. These significant changes have influenced courts’ views as to whether a stay will simplify the issues at district court—likely leading to higher success rates for stay requests.

The Impact of the SAS Decision

Post-SAS district court decisions suggest that courts are more likely to grant a motion to stay now that the PTAB must address and rule on every ground raised by the petitioner. In Nichea Corp. v. Vizio, Inc., for example, the court noted that a stay was likely to simplify issues in the district court litigation in part because “the PTAB [is] taking the new all-or-nothing approach to institution decisions, [and] there’s no concern about the PTAB picking and choosing certain claims or certain invalidity grounds from each petition.”8 Similarly, in Zomm, LLC v. Apple Inc., the Court stated “given that the [PTAB] must now issue final written decisions as to every ground raised in the instituted petition under recent Supreme Court case law, there is a real possibility that the IPR process will simplify the case.”9 Likewise, the Court in SPEX Techs., Inc. v. Kingston Tech. Corp., found that inter partes review held potential to simplify the case since the PTAB would review all the claims which the petitioner challenged.10 Moreover, with the PTAB addressing every claim the petitioner challenges, courts have recognized that “the PTAB will provide a more robust record that considers the scope and meaning of the claims, clarifies claim construction issues, and is preclusive on issues of patent validity.”11 Subsequently, the “outcome of the PTAB’s review of the claims will be of ‘invaluable assistance’ to [courts].”12

The SAS decision has also served as the basis for some courts’ willingness to grant a stay pre-institution of the related AIA contested proceeding. For example in Lund Motion Prods., Inc. v. T-Max Hangzhou Tech. Co., the court granted a stay where the defendants’ IPR petitions covered every claim of three of the four patents at issue before the district court.13 The court noted that if instituted, the PTO would have to address all of the claims in those patents, thus simplifying the issues before the district court.14 In Wi-LAN, Inc. v. LG Elecs., Inc., the court also granted a stay pending the PTO’s institution decision.15 There, the court attributed their stay decision to the recent Supreme Court SAS decision, stating “[w]hile review is not guaranteed and, therefore, the benefits of review are only speculative at this juncture, in light of the Supreme Court’s mandate to review all contested claims upon grant of IPR and the complexity of this case, the [simplification of issues] factor weighs in favor of a limited stay of proceedings until the PTO issues its decisions on whether to institute IPR.”16

Nonetheless, despite the SAS tailwind, some courts have been hesitant to find that changes under SAS would likely lead to a simplification of issues. Some courts still believe that that even with the PTAB’s review of all challenged claims under SAS, the extent to which the PTAB would simplify issues was likely limited.17 Further, in at least one case, the judge saw SAS having the opposite impact. In Peloton Interactive, Inc. v. Flywheel Sports, Inc., the court denied the stay finding that any institution decision post-SAS provides “a weaker inference that the PTAB will determine that all challenged claims are unpatentable.”18 The court reasoned that because the PTAB can no longer partially institute IPR proceedings, the institution decisions are “less effective as a barometer for the issue of whether the PTAB will eventually determine that the challenged claims are unpatentable.”19

The Impact of the PTAB claim construction standard change

While there are no final written decisions applying the Phillips standard, there is also some indication that courts are granting more motions to stay in light of the PTAB’s adoption of the Phillips claim construction standard. Notably, petitioners and patent owners alike can no longer distinguish their arguments under the BRI standard in AIA proceedings from those made under Phillips in district court. More fundamentally, there will likely be more consistency across the PTAB and District Court forums, as to the meaning of claim terms.