The Resurgence and Perils of Ex Parte Reexaminations

An ex parte reexamination is a powerful tool for third-party requesters—often defendants in a patent lawsuit—to attack the validity of patent claims without the estoppel risks associated with IPR and PGR proceedings. Patent Owners, on the other hand, can use ex parte reexaminations as a faster alternative to reissue to strengthen their patent claims against invalidity challenges in later or parallel AIA, district court, or US International Trade Commission (ITC) trials. A reexamination request can challenge the validity of one or more claims in the patent on proposed novelty or obviousness grounds based only on patents and other printed publications. Parties can file a reexamination at any time after a patent is granted and up to six years after it expires. 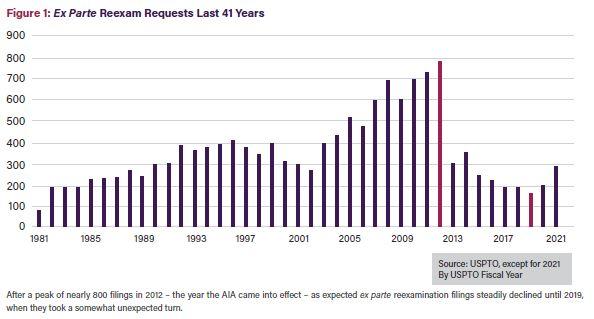 A surge in reexamination requests following a “failed” AIA challenge accounts for a portion of the overall growth of reexamination filings. As shown in Figure 3, about a third of all such do-over reexaminations were filed in the past two years. Nonetheless, these do-over filings do not fully explain the recent increase in popularity of ex parte reexaminations. 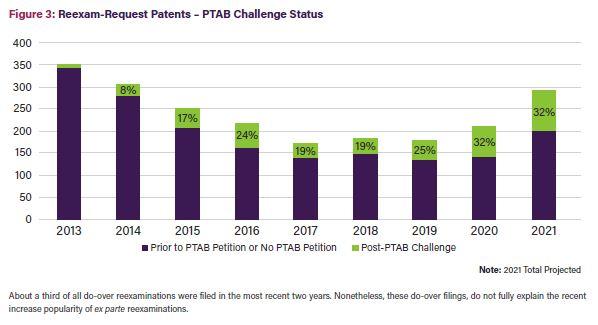 The overall increase in filings since 2019 appears to be attributable to three primary factors: (1) Fintiv (35 U.SC. § 314(a)) and 35 U.SC. § 325(d) discretionary denials, (2) IPR/PGR petitioners who failed on the merits, and (3) accused infringers who either sought to avoid PTAB-related estoppels or delayed filing at the PTAB until after a 35 U.SC. § 315 bar but still wanted to seek a PTO invalidity challenge. 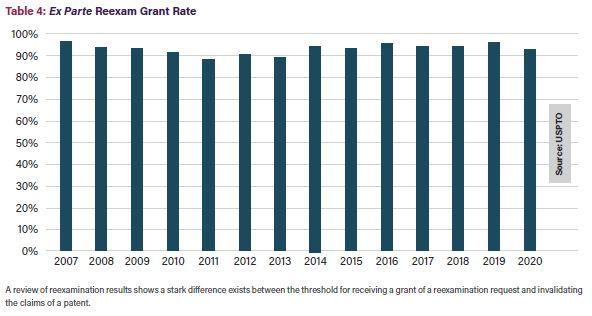 Although grant rates are high, however, invalidating all the claims of a patent is rare, coming in at around 15 % (whether or not a patent owner or a third party files the request), as shown in Tables 5 and 6. 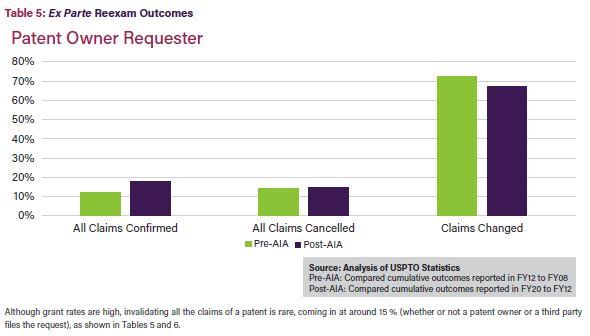 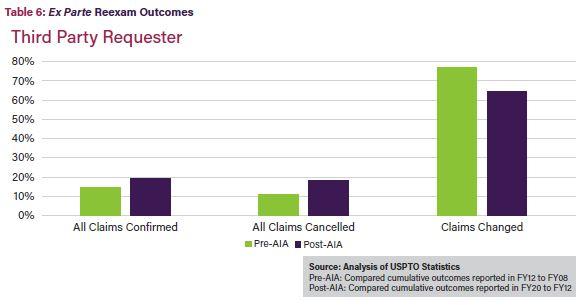 A complex set of rules govern ex parte reexaminations. From a requester perspective, a successful reexamination request requires at least three things: excellent prior art supported by detailed claim charts, a strong expert declaration, and a reexamination request that ties everything together. A strong expert declaration must demonstrate why the claimed invention is in the public domain through a thorough technical tutorial, how and why it is obvious to combine the art, while demonstrating a high expectation of success in achieving the reference combination. Additionally, and often a shortcoming in requests, the request must demonstrate there are no legal, statutory, or rule-based estoppels, bars, or issues that prevent the establishment of an SNQ of patentability.

Finally, despite the somewhat misleading “ex parte” characterization of reexaminations, under the new regime discussed below, requesters need to monitor the reexamination proceeding as a requester may file opposition or rebuttal briefs addressing certain patent owner filings.

From a patent owner perspective, there are three critical reexamination aspects. First, although reexaminations are ex parte, they are extremely asymmetric attacks. Second, while reexaminations have a historical reputation of being slow to achieve a final determination, the reality is that the active prosecution aspect of reexaminations happens very quickly and the timeline for prosecution leaves no little flexibility. Third, reexamined patents usually emerge, but with amended claims that are narrower, which trigger intervening rights and potentially reduced damages.

Unlike a reissue proceeding that may not impact the as-issued patent if the proceeding is abandoned, reexamination does not permit the patent owner to stop the reexamination without abandoning some or all claim scope completely.

Once a reexamination begins, the timeline is aggressive and unforgiving. Typically, within five months of instituting the reexamination, the patent office issues a first Office action on the merits. The Office action can either reject the claims based on the request or reject the claims entirely independent of the request relying on completely new art. It is more typical, however, for the Examiner to write an Office action based on the reexamination request. The patent owner has a non-extendable by right two-month period to respond to the first Office action.3 Here we want to note a very important distinction from original prosecution that can create issues for the uninformed.

During ex parte prosecution, patent owners can retroactively take those extensions by right and without limitation to receive needed flexibility. For example, extensions of time can allow better arguments and perhaps inventors or experts to be marshalled in support of a response. Even so, applicants try to avoid extensions of time because they are costly, both in dollars and in modifications to the patent term.

In reexaminations, though, extensions of time are not retroactive or by right. Indeed, a patent owner must request an extension before the initial response due date and must comply with the deadline unless the patent office grants the extension. The language of the rule, Rule 1.550(c) seems reasonable—extensions are available with “sufficient cause” and “not for more than a reasonable time.” In practice, while extensions of two-weeks to one month are often granted, a longer extension is essentially impossible absent extenuating circumstances such as acts of nature, incapacity, or death.

The Patent Office tries to conduct reexaminations such that the second Office action is final.5 Once the action becomes final, the patent owner has limited options. The patent owner has no right to further prosecute. So either an after Final reply taking allowable subject matter or proposing very narrowing amendments for allowability needs to be filed or a notice of appeal. If the Examiners decline to change their mind in response to an after-final submission, the patent owner’s only recourse is an appeal to the Board.6

Ultimately, based on the statistics shown above, most reexamination patents do eventually issue. But the result is that the claims are almost always amended. This is deeply problematic for patent owners as claims amended in reexamination cannot always be used to recover past damages because of intervening rights, a very complex area of the law.

Ex Parte Reexamination in a New State of Flux: The Impact of Vivint.

With the surge in do-over reexamination requests after a failed AIA proceeding, the interpretation of ex parte reexamination rules will likely continue to evolve as they adapt to the interplay with IPR proceedings. One such evolving interpretation involves the relationship between establishing an SNQ and 35 U.S.C. § 325(d), which has become increasingly important and relevant. In particular, do the SNQ and § 325(d) tests require different and explicit requester, patent owner, and CRU analysis before or after granting or denying a request?

The SNQ standard has a long history. 35 U.S.C. § 303(a) states in relevant part, “within three months following the filing of a request for reexamination . . . the Director will determine whether a substantial new question of patentability affecting any claim of the patent concerned is raised by the request.” A prior art patent or printed publication raises an SNQ where there is a substantial likelihood that a reasonable examiner would consider the prior art patent or printed publication important in deciding whether the claim is patentable.7 The SNQ standard, for which inquiry is based upon fact analysis and performed on a case-by-case basis, seeks to protect the patentee from harassing invalidity challenges. The SNQ requirement protects patentees from having to respond to, or participate in unjustified reexaminations. Further, the requirement bars reconsideration of any argument already decided by the Office, whether during the original examination or an earlier reexamination.8

On the other hand, 35 U.S.C. § 325(d) provides, in pertinent part, that “in determining whether to . . . order a proceeding under . . . chapter 30 [the chapter relating to ex parte reexamination], . . . the Director may take into account whether, and reject the petition or request because, the same or substantially the same prior art or arguments previously were presented to the Office.” Congress included this section in the AIA to similarly stop harassment of patent owners.

The relationship of what is an SNQ and what qualifies for denial of grant under § 325(d) is unclear. For example, is the bar to proving an SNQ higher or lower than the bar to denying a request because it includes substantially the same art or arguments? Are the same or different factors considered for each? Does the CRU have to address each separately in an Order, or even address them at all explicitly? Does issuing an Order granting reexamination imply the CRU considered both these provisions and moved forward anyway? The Federal Circuit recently suggested as much in In re Vivint, 14 F.4th 1342, 1350 (Fed. Cir. 2021). The issues,9 while still in a state of flux, addressed in Vivint are still evolving and critical to effective reexamination practice.

Thus, best practice requires that a requestor address both why they have established a SNQ and why the Office should not deny the request under § 325(d). The patent owner needs to be ready to respond through petition practice if they believe the requester or CRU is wrong in their analysis.