While the Patent Trial and Appeal Board (PTAB) appears to be fully embracing virtual and remote platforms to continue business as usual during the COVID-19 pandemic, the Federal Circuit has had a mixed response. The Court has advised that all oral arguments for the foreseeable future will be handled telephonically, but many cases that were originally scheduled to be argued live will now be submitted on the briefs alone.

In at least one case, however, the Federal Circuit has reversed its scheduled change. In In re: Publicover, an ex parte appeal from the Patent Office, the Federal Circuit reinstated oral argument after the appellant and its counsel contended that allowing the argument to take place would support diversity and inclusion initiatives within the legal profession, based on the attorney set to argue the case. It is possible that other types of justifications will also convince the Court to grant oral argument on a case-by-case basis, creating a body of precedent similar to that seen in regional circuits. We will continue to track and analyze this new trend in Federal Circuit jurisprudence. 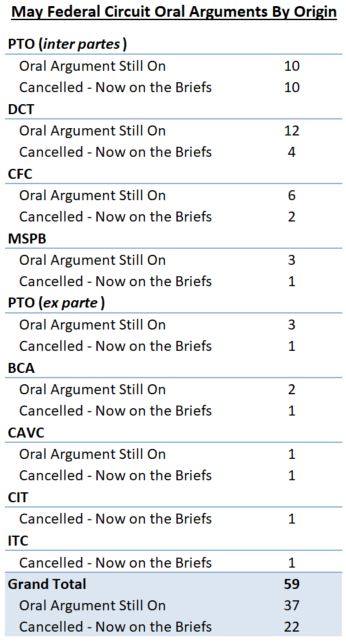 This article appeared in the April 2020 issue of PTAB Strategies and Insights. To view our past issues, as well as other firm newsletters, please click here.