Motions to amend have historically been viewed as an exercise in futility. The Director of the United States Patent and Trademark Office (USPTO), Andrei Iancu, agrees, having publicly stated that “[s]ome have suggested that parties have simply stopped even trying to amend the claims because they see the effort as largely futile.”1 Director Iancu has since set his sights on overhauling this failing motion-to-amend system.2

Changes to Motions to Amend

Should the patent owner request preliminary guidance, the Board will determine if the patent owner has met the regulatory and statutory requirements, as outlined in Lectrosonics. To meet statutory and regulatory requirements, a motion to amend must: propose a reasonable number of substitute claims; propose substitute claims that do not enlarge the scope of the claims or 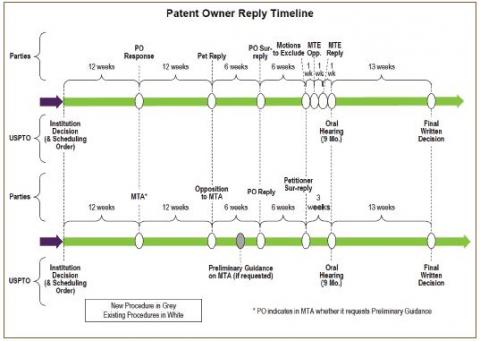 introduce new subject matter; respond to a ground of unpatentability involved in the trial; and set forth written description support for each substitute claim.7 The Board also determines if the petitioner has established a reasonable likelihood that the proposed substitute claims are unpatentable.8 The Board can issue its guidance in a short, non-binding paper or orally by conference call. In response to the petitioner’s opposition to the motion to amend and/or the Board’s preliminary guidance (if requested), the patent owner may take one of two options: (i) reply to the petitioner’s opposition to the motion to amend and the preliminary guidance (if requested); or (ii) file a revised motion to amend. 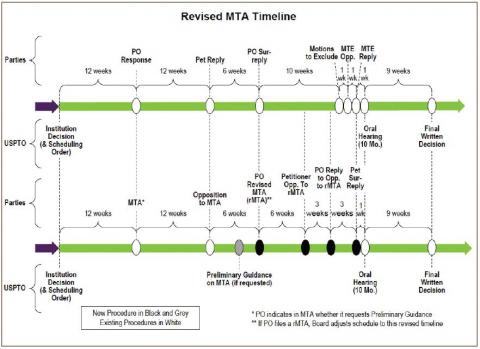 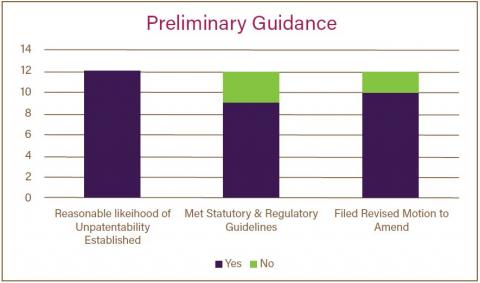 While the data on preliminary guidance seems to paint a bleak picture for the patentability of the proposed substitute claims, the patent owners in these cases still have an opportunity to file a revised motion to amend. To date, ten revised motions to amend have been filed. Since there have not yet been any final written decisions for these cases, it is still too early to tell whether the pilot program has indeed overhauled the motion-to-amend process. It seemed as though the new pilot program would favor patent owners, but the initial numbers suggest otherwise. We will have to wait for data on final written decisions after receiving preliminary guidance to see if the new pilot program truly favors patent owners.