Developments in Antedating Asserted Art at the PTAB

USPTO Patent Trial and Appeal Board (PTAB) decisions in 2021 show that antedating a prior-art reference remains a viable option to knock out a ground in an inter partes review (IPR) petition—patent owners were successful in such an endeavor 57% of the time. However, the decisions in 2021 reaffirm that patent owners need to prepare for an arduous (and expensive) fight—one that involves several declarations to corroborate inventor testimony and authenticate documents. But unlike early PTAB cases where patent owners needed to appeal to the US Court of Appeals for the Federal Circuit to reverse or vacate unfavorable decisions, patent owners have increasingly been able to obtain favorable outcomes at the PTAB. This appears to be due to patent owners submitting better corroborating evidence.

The Three Approaches to Antedating a Reference 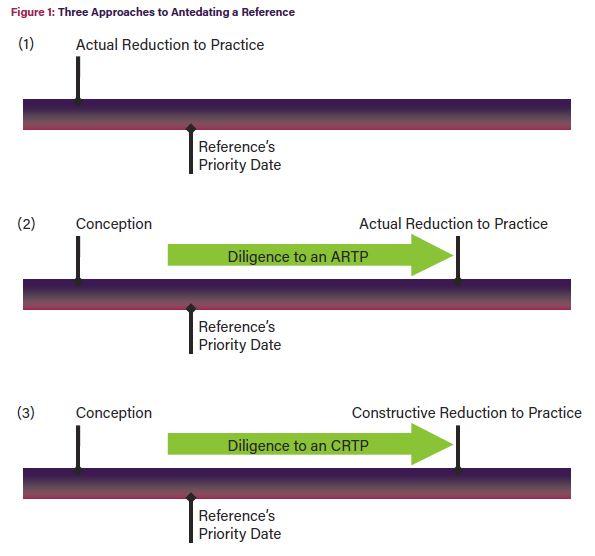 Proving these elements is highly fact specific and the caselaw has well-established evidentiary requirements for making these showings. For example, inventor testimony by itself is insufficient to show conception, diligence, and/or a reduction to practice. See Loral Fairchild Corp. v. Matsushita Elec. Indus. Co., 266 F.3d 1358, 1363 (Fed. Cir. 2001) (citing Cooper v. Goldfarb, 154 F.3d 1321, 1330 (Fed. Cir. 1998)). Instead, a patent owner must corroborate inventor testimony with evidence that supports the inventor’s testimony. In re NTP, Inc., 654 F.3d 1279, 1291 (Fed. Cir. 2011). The sufficiency of corroboration is determined using a “rule of reason.” Medichem, S.A. v. Rolabo, S.L., 437 F.3d 1157, 1170 (Fed. Cir. 2006) (citing Price v. Symsek, 988 F.2d 1187, 1195 (Fed. Cir. 1993). Requiring that an inventor’s testimony be corroborated “provides additional safeguard[s] against [the] court being deceived by inventors” that may be tempted to mischaracterize past events. Id. Corroborating evidence “may consist of testimony of a witness, other than the inventor, to the actual reduction to practice or it may consist of evidence of surrounding facts and circumstances independent of information received from the inventor.” Id. at 1171. Patent owners should, however, avoid using the testimony of a co-inventor as corroborating evidence. See, e.g., Lacks Indus. v. McKechnie Vehicle Components USA, Inc., 322 F.3d 1335, 1350 (Fed. Cir. 2003) (opining that the Special Master rightly refused to accept cross-corroboration of oral testimony as being adequate).

The PTAB evaluated antedating arguments in seven cases in 2021; the outcomes of these seven unique decisions are presented in Figure 2 below. Patent owners were successful under the first approach and the third approach for antedating (shown in Figure 1). Patent owners did not attempt to antedate a reference using the second approach in any case decided in 2021.

2021 PTAB decisions demonstrate that successfully antedating a reference continues to be a fact specific and challenging undertaking, often requiring patent owners to submit and persuasively explain considerable amounts of evidence. That said, because the caselaw is now more developed, patent owners have insight into and predictability surrounding the types and amounts of evidence necessary to prevail. For example, in prior years, the PTAB was stringent, too stringent in some cases, on what type of evidence corroborates inventor testimony about diligence. See, e.g., ATI Techs. ULC v. Iancu, 920 F.3d 1362 (Fed. Cir. 2019); Perfect Surgical Techniques, Inc. v. Olympus Am., Inc., 841 F.3d 1004 (Fed. Cir. 2016). The Federal Circuit clarified that a patent owner does not need to prove that the inventor continuously exercised reasonable diligence throughout the critical period. Perfect Surgical, 841 F.3d at 108-09 (Fed. Cir. 2016). Instead, the patent owner must only show there was reasonably continuous diligence. Id. As such, small gaps during the critical period are not dispositive, and can be reasonable when the corroborating evidence as a whole is considered. Id.

These cases also demonstrate that testimony from non-inventor, fact witnesses (and preferable a disinterested fact witness) is a potent tool for antedating an asserted prior-art reference. Patent owners’ likelihood of success appears to markedly decrease without such evidence to corroborate facts and authenticate documents. In cases where the patent owner relied on inventor testimony and lab notebooks without testimony from a non-inventor, the PTAB determined that the patent owner failed to meet its burden for corroboration. Stahls’ Inc., IPR2020-00641, Paper 42 at 19-30; Apple Inc., IPR2019-01258, Paper 29 at 45-48.

The data in Figure 3 shows the number of Final Written Decisions per year in which the patent owner was successful at antedating a reference. Before 2016, patent owners had a very low success rate, bottoming out in 2016 at 6.25%. But over the last five years, there was a dramatic shift in the patent owner’s success rate. In 2017-2020, patent owners were successful between 30-50% of the time. 2021 was a little above this range. While the complexity of these types of cases and the small sample size make it challenging to infer causality, this increase in success rate since 2016 suggests that patent owners better-understand the PTAB’s high evidentiary demands for antedating a reference. 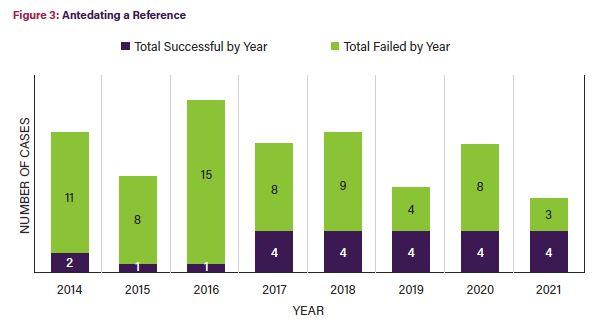 Higher success rates post-2016 may also suggest that the PTAB has adjusted to Federal Circuit reversals and remands, to the benefit of patent owners. Over the past several years, patent owners have been arguing to the Federal Circuit that the PTAB is placing too high of a burden to prove earlier conception, diligence, and/or reduction to practice. For example, patent owners argued that the PTAB applied the higher standard of continuous reasonable diligence instead of reasonable continuous diligence. See ATI Techs., 920 F.3d at 1369; Perfect Surgical, 841 F.3d at 1012. The Federal Circuit agreed, vacating and at times reversing PTAB decisions for applying an incorrect heightened standard for diligence. See ATI, 920 F.3d at 1374-75 (reversing the PTAB’s decision on diligence); Perfect Surgical, 841 F.3d at 1012 (vacating and remanding the PTAB’s decision on diligence). The Federal Circuit has also vacated and at times reversed PTAB decisions because the PTAB misapplied the rule of reason standard for corroborating inventor testimony. See Intellectual Ventures II LLC v. Motorola Mobility LLC, 692 F. App’x 626, 629 (Fed. Cir. 2017) (non-precedential) (vacating and remanding because “the Board did not make proper application of the rule of reason to determine whether there was sufficient corroboration of inventor testimony to demonstrate prior conception.”); REG Synthetic Fuels, LLC v. Neste Oil Oyi, 841 F.3d 954, 965 (Fed. Cir. 2016) (reversing the PTAB’s decision on conception and remanding for further fact findings on diligence and reduction to practice).

The PTAB’s 2021 decisions suggest that it is adjusting in response. The PTAB in 2021, for example, stated that patent owners need to corroborate inventor testimony only under a “rule of reason” standard, not some other higher standard. See Medtronic, Inc., IPR2020-00135, Paper 128 at 16; see also CallMiner, Inc., IPR2020-00220, Paper 59 at 79-80 (stating that corroboration is sufficient when “a reasonable mind might accept the evidence as adequate.”). The PTAB also cited the ATI case—a case where the US Court of Appeals for the Federal Circuit reversed a PTAB decision for applying the wrong standard for diligence—to explain why patent owners need to show only reasonably continuous diligence, not a heightened diligence standard. See Intuitive Surgical, Inc., IPR2019-00991, Paper 48 at 23.

The PTAB’s application of more patent-owner friendly precedent suggests that antedating will remain a viable option for patent owners in 2022. Although patent owners have had higher success rates recently, antedating a reference is no small feat. It requires extensive evidence, cooperative witnesses, and a strong legal team to piece together and persuasively present the evidence.

1. A pre-AIA patent is a patent with an effective filing date before March 16, 2013. The America Invents Act (and its first-to-file provisions) apply to patents filed on or after this date.
2. For an ARTP, the patent owner must show that the inventors: (1) con-structed an embodiment or performed a process that meets all the claim elements; and (2) determined that the invention would work for its intended purpose. Cooper v. Goldfarb, 154 F.3d 1321, 1327 (Fed. Cir. 1998).
3. Conception is the mental formulation of a complete idea for the claimed subject matter. Townsend v. Smith, 36 F.2d 292, 295 (C.C.P.A. 1929).
4. Diligence is work that is reasonably necessary for a reduction to practice. See Keizer v. Bradley, 270 F.2d 396, 396-99 (C.C.P.A. 1959).
5. A “constructive reduction to practice occurs when a patent application on the claimed invention is filed.” Hybritech Inc. v. Monoclonal Antibodies, Inc., 802 F.2d 1367, 1376 (Fed. Cir. 1986).
6. Cases included in this research were identified in Docket Navigator using the following search criteria: Patent Trial and Appeal Board; Final Written Decision – Patentability of Challenged Claims; on or after January 1, 2014; and “conception” OR “reduction to practice.”