Law360 (May 4, 2020, 12:36 PM EDT) -- Design patents are an increasingly valued way of protecting the appearance of products, from graphical user interfaces to automotive parts, as well as to fend off would-be competitors and those who are likely to copy or knock off.

But how do design patents stack up in the realm of enforcement? By numerous indicators, design patents appear to be substantially outperforming their utility counterparts.

Combined with the potential for recovering an infringer's total profits, design patents represent a potent and durable form of intellectual property for those aiming to protect the appearance of products.

Here, we present an analysis of how design patents are performing according to these indicators based on data collected in February using the Docket Navigator [1] research platform and official statistics reported by the U.S. Patent and Trademark Office. We conclude with some analysis regarding why design patents are holding up so well in terms of enforcement and defense.

Design Patents Outperform on the Merits in District Court

Those familiar with the dynamics of patent litigation know that infringement and validity are the name of the game and that weakness on either front can doom an enforcement campaign. A survey of outcomes in patent litigation dating back to the 1990s shows that design patents are outperforming their utility counterparts on both fronts. [2] 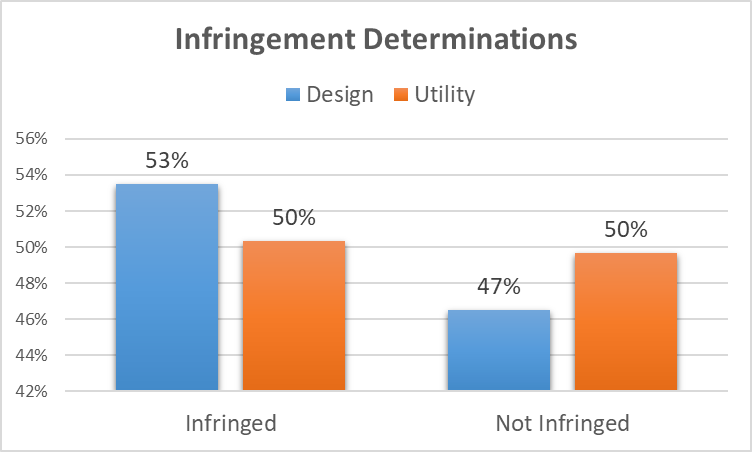 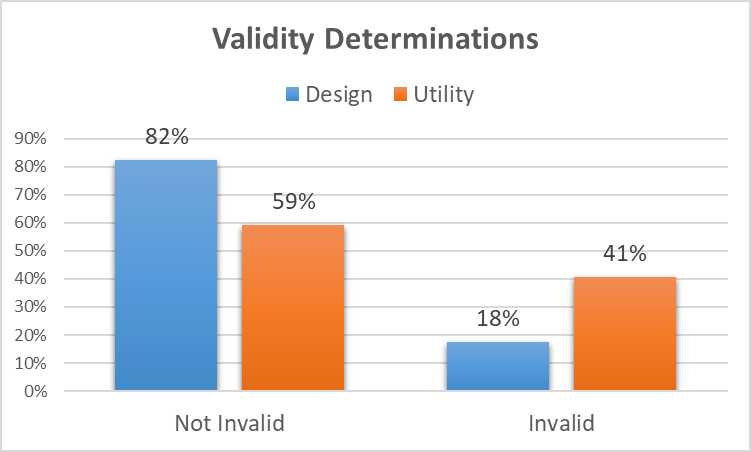 While petitioners are successful at least 60% of the time in getting the PTAB to institute trial on patents in the biotech, chemical, electrical/computer, mechanical and business method arts, that is not the case for design patents. To date, the institution rate for petitions filed against design patents is only 41%. This is based on a total of 46 institution decisions (19 grants and 27 denials). Since the end of 2016, design patents have maintained an institution rate below 50%. [3] 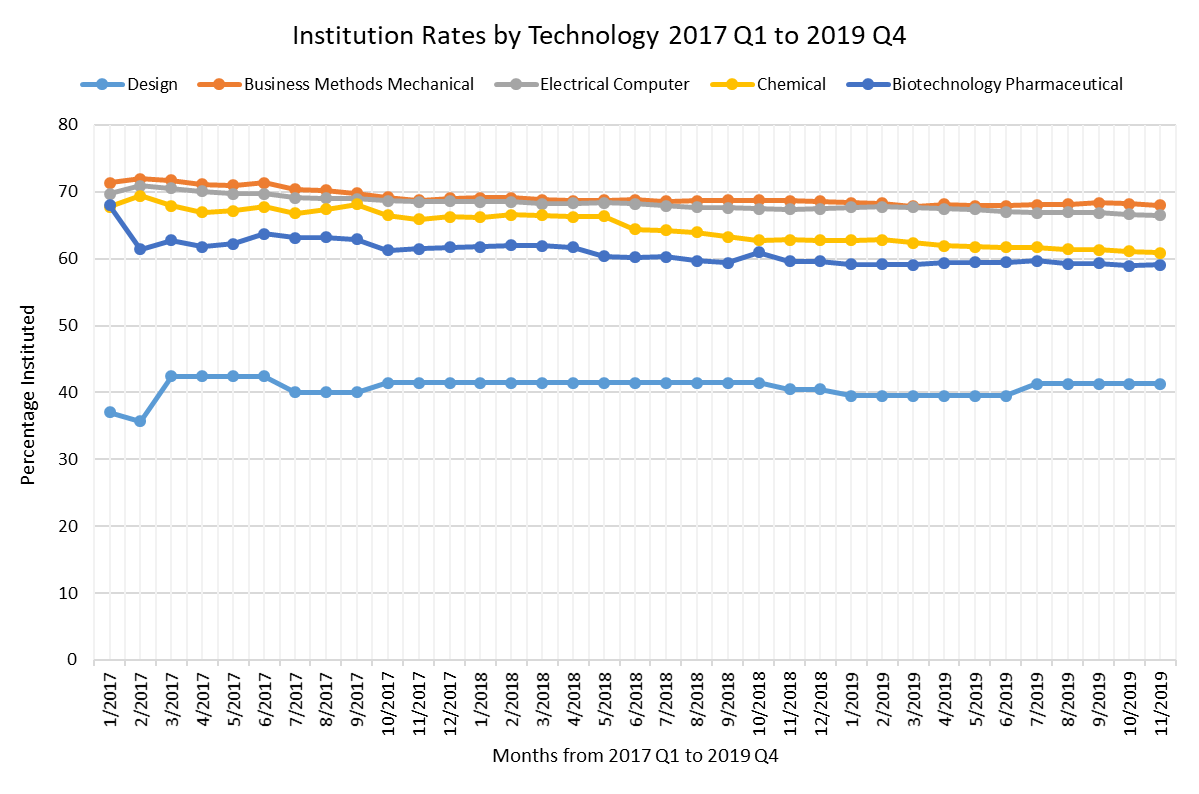 In addition to ensuring that a design patent is not found unpatentable by the PTAB, securing denial of institution can matter for an enforcement campaign. A defendant's failed attempt to initiate a post-grant proceeding against an asserted patent avoids the disruption of a stay of the litigation pending review by the PTAB and often chills confidence about invalidity.

Securing denial of institution can also weigh in favor of a preliminary injunction. Furthermore, it goes without saying that scoring an early victory before the PTAB can help promote settlement.

Injunctive relief, whether temporary or permanent, is often viewed as the king of remedies. An injunction allows the patentee to exclude (at least temporarily) a competitor from the marketplace, creating significant leverage in a dispute. Design patents are outperforming when it comes to injunctive relief.

A survey of contested motions for injunctive relief that were decided since 2006 that were either granted, denied or granted in part shows that movants asserting design patents were more successful than the overall field for all types of injunctive relief: preliminary injunctions, temporary restraining orders and permanent injunctions. 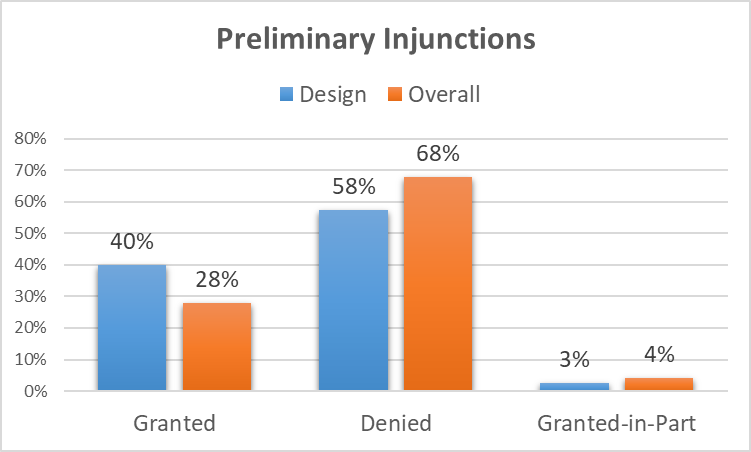 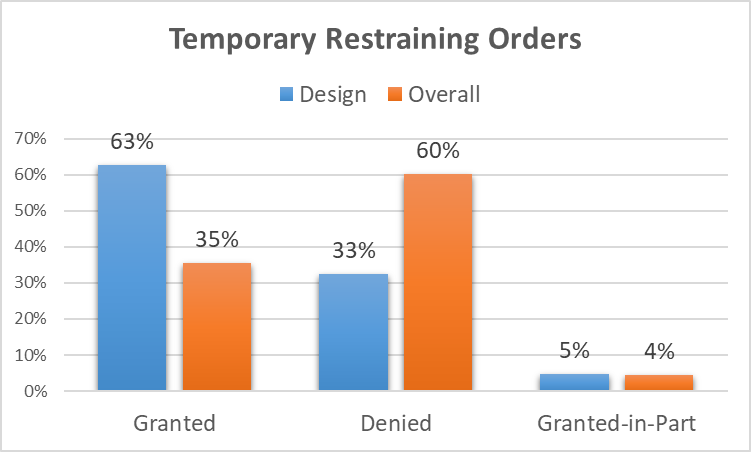 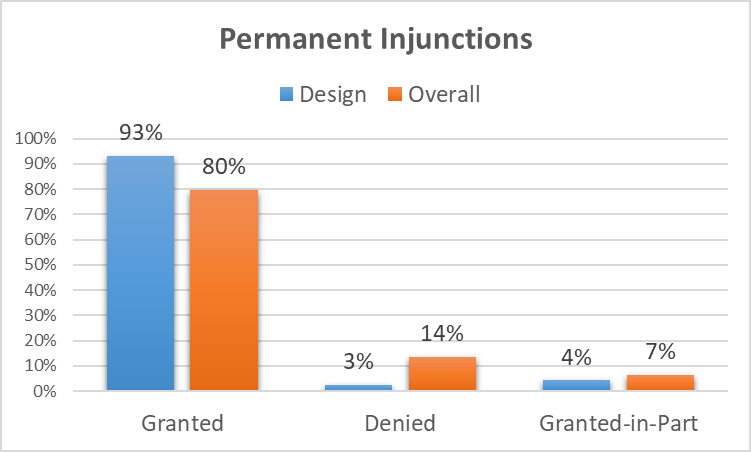 Why Are Design Patents Proving So Successful?

By each of the indicators above — which relate to outcomes on infringement, validity and injunctive relief — design patents appear to be outperforming their utility counterparts. Here, we explore some of the possible reasons for this trend and consider the strategic implications.

This is because the standard for design patent infringement, known as the ordinary observer test, is performed from the perspective of "an ordinary observer, giving such attention as a purchaser usually gives, two designs" to determine if the two designs are substantially the same. [4]

Another reason for the outperformance of design patents on infringement may be the ability of patentees to claim a portion of an article (known as a partial design). For a partial design, an accused product cannot avoid infringement based on differences in its appearance in areas that are not claimed.

Why are design patents surviving validity attacks? Whether in district court or before the PTAB, the reason appears to be that challengers are failing to assert prior art that is sufficiently close to the claimed design. This is consistent with the reasoning set forth in numerous PTAB decisions declining to institute post-grant proceedings against design patents, resulting in the relatively low institution rate discussed above.

The standards governing obviousness and anticipation are unique to design patent law. [6] Petitioners have struggled to meet the standard for anticipation because the PTAB often finds that the differences between the prior art and the claim are noticeable to an ordinary observer, not trivial. [7] With respect to obviousness, petitioners have often failed to put forth an adequate primary reference, or Rosen reference (after the seminal 1982 U.S. Court of Customs and Patent Appeals case In re: Rosen), [8] the design characteristics of which are basically the same as the claimed design. [9]

Many times the PTAB has concluded that a "side-by-side comparison … reveals significant differences between [the Rosen reference's] design and the claimed design." [10] This difficulty largely explains the low institution rate before the PTAB — the prior art being brought to bear is just not close enough.

Finally, with respect to injunctive relief, a key driver for design patents' relative success compared to the overall field seems to be that design patent disputes often involve copying or knocking off by a competitor. Copying by a competitor is likely to create several circumstances that weigh in favor of injunctive relief, particularly where the infringer is undercutting the patentee on pricing by offering similar-looking goods of inferior quality.

These circumstances tend to result in loss of market share, sales, and revenue, irreversible price erosion, loss of customer goodwill, reputational harm, and other irreparable harms that are not compensable by money damages. In the case of a product that is commercially successful based on its appearance (as many consumer products are), nexus between the harm and infringement can often be shown.

Another dynamic arising in the injunction context is the outperformance of design patents in obtaining temporary restraining orders, including by ex parte application. As shown above, the grant rate in the case of design patents is 63% compared to 35% by the overall field. One reason may be that products protected by design patents are often knocked off by companies that do not have a regular place of business or assets in the U.S.

Many such companies market and sell a large volume of products transiently, e.g., at a trade show, and then disappear — making it difficult if not impossible for the patentee to recover a money judgment. In such cases, design patentees are well-positioned to request an ex parte temporary restraining order. Looking forward, there is also a bill currently pending before Congress that would make it easier and faster for design patentees to obtain ex parte injunctive relief for imported infringing products. [11]

Taken as a whole, the outperformance of design patents has important strategic implications for companies and industries where product design provides a competitive edge and drives demand.

First, it is important to protect valuable product designs. As shown above, design patent protection is strong and readily enforceable against those who are copying or knocking off.

Second, design patent enforcement can be an effective way to immediately stop harmful infringement. Courts are willing to grant both temporary and preliminary injunctive relief, even ex parte, because design patent infringement is often clear and the rights tend to be difficult to invalidate.

Third, with or without injunctive relief, design patents offer the potential for damages that are unavailable in the utility context, namely, recovery of the infringer's total profits.

Given these performance measures, design patents represent a powerful and durable form of intellectual property offering significant value to those who use them to protect their designs.

The opinions expressed are those of the author(s) and do not necessarily reflect the views of the firm, its clients or Portfolio Media Inc., or any of its or their respective affiliates. This article is for general information purposes and is not intended to be and should not be taken as legal advice.

[3] Sterne Kessler compilation of official statistics of the U.S. Patent & Trademark Office relating to the Patent Trial and Appeal Board from January 2017 to November 2019.

[6] The standard for anticipation of a design patent is referred to as the "ordinary observer" test, which provides that a design claim is unpatentable if "in the eye of an ordinary observer, giving such attention as a purchaser usually gives, two designs are substantially the same, if the resemblance is such as to deceive such observer, inducing him to purchase one supposing it to be the other." Int'l Seaway Trading Corp. v. Walgreens Corp., 589 F.3d 1233, 1240 (Fed. Cir. 2009) (quoting Gorham Mfg. Co. v. White, 14 Wall. 511, 81 U.S. 511 (1871)). The standard governing obviousness of a design patent is "whether the claimed design would have been obvious to a designer of ordinary skill who designs articles of the type involved." Apple, Inc. v. Samsung Elec. Co., 678 F.3d 1314, 1329 (Fed. Cir. 2012) (quoting Durling v. Spectrum Furniture Co., 101 F.3d 100, 103 (Fed. Cir. 1996)). This analysis involves an inquiry with two steps, such that: (1) "one must find a single reference [a so-called Rosen reference] . . . the design characteristics of which are basically the same as the claimed design," and (2) "[o]nce this primary reference is found, other references may be used to modify it to create a design that has the same overall visual appearance as the claimed design." High Point Design, LLC v. Buyers Direct, Inc., 730 F.3d 1301, 1311 (Fed. Cir. 2013).

[11] The "Counterfeit Goods Seizure Act of 2019," which was introduced by Senators Tillis, Coons, Cassidy, and Hirono, would allow Customs and Border Patrol to directly seize goods based on design patent infringement, obviating the need for a design patentee to first obtain an infringement finding and exclusion order.