Law360's Diversity Snapshot: How Your Firm Stacks Up

But industrywide progress has come slowly, giving Law360 Pulse an impetus to revamp its Diversity Snapshot and shed new light on firms' efforts to create a more diverse workplace.

Last year's Diversity Snapshot report scored firms based on their proportion of minority attorneys and proportion of minority equity partners, awarding points based on their rank in the two categories. This year's ranking goes beyond the data submitted in response to our latest survey, showing how firms' unique headcounts would have to break down by race and ethnicity to align with the potential marketplace of hires. It creates a pipeline score to account for how attorney diversity often shrinks at each successive level of the attorney hierarchy, despite the pool of available talent.

The pipeline score measures a given firm's percentage points above or below a set of benchmarks we created using data from the American Bar Association and firms' own headcounts. In order to compare firms to their peers of relatively similar size, we ranked firms within one of four headcount groups. A total of 266 firms were evaluated in this edition.

How Does Your Firm Measure Up?
The top firms in each size category are shown with their pipeline score, as well as their portion of minority equity partners, nonequity partners and associates. 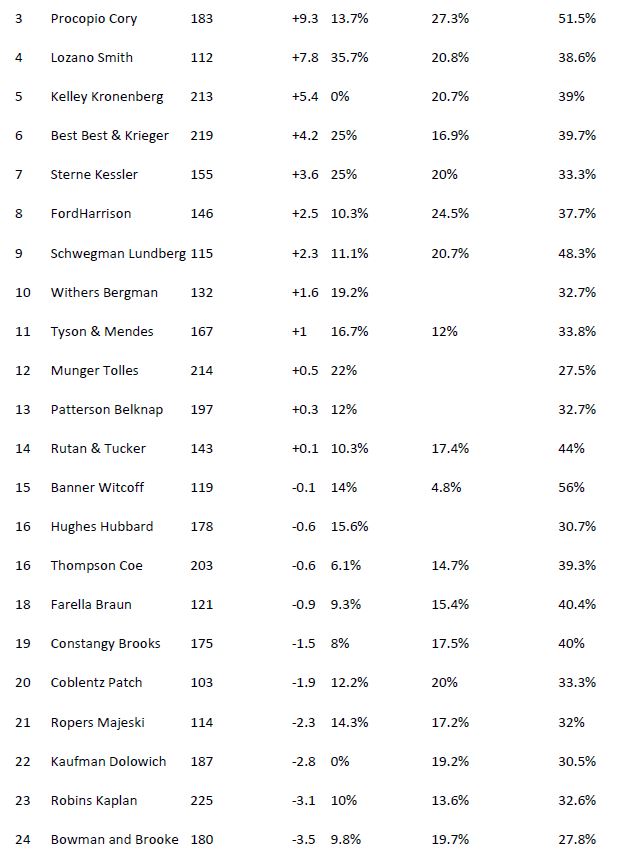 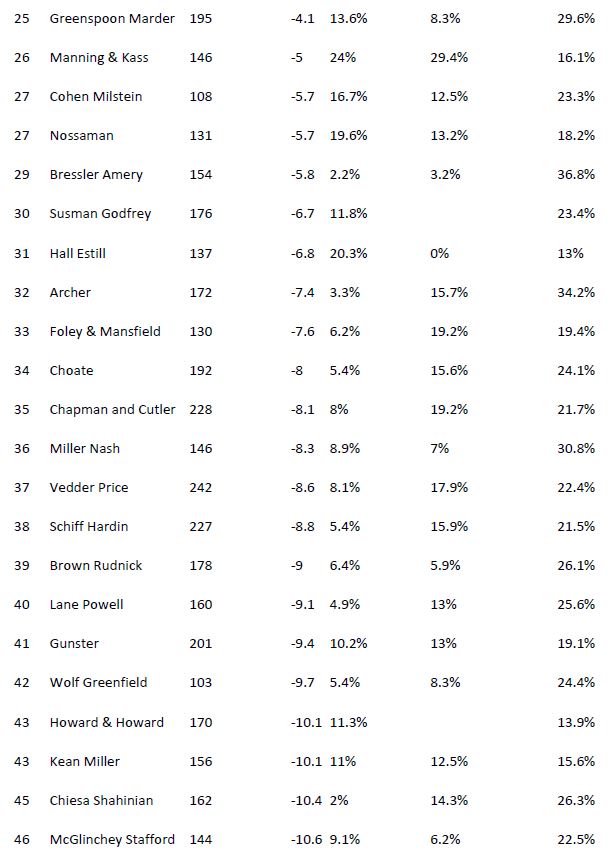 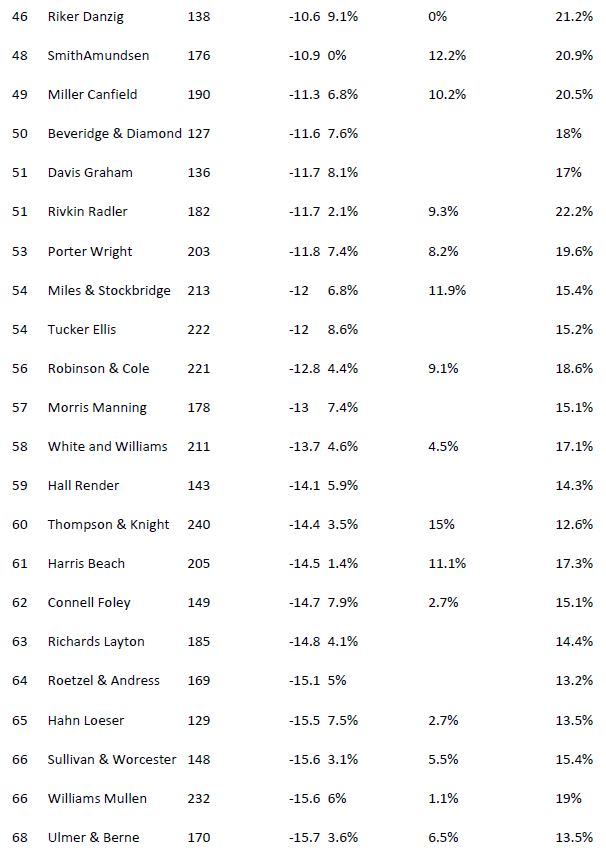 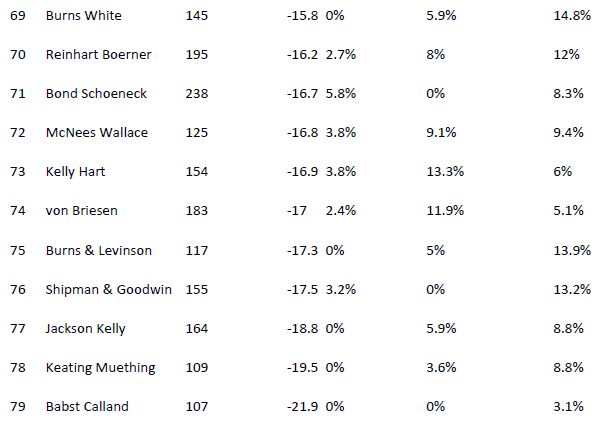 We found that just 17.3% of firms exceed the benchmarks, with small firms showing an edge for landing in the positive range. That slice, though narrow, is large enough to suggest that the outside benchmarks from Law360 Pulse and ABA data represent attainable goals.

We also found that nearly one-fifth of firms, while missing the benchmarks, came within five points of the target.

Half of the firms surveyed fell between five and 15 points below the benchmarks, indicating that there is significant work to be done in shoring up diversity. And 13.2% of firms scored more than 15 points lower than the target thresholds.

Among firms of 251 to 600 attorneys, immigration-focused Fragomen, Del Rey, Bernsen & Loewy LLP took the top spot. Fragomen was also one of just nine firms overall to place at least 10 points ahead of the benchmarks. Fenwick & West LLP, second in the same size category, nearly reached double digits, besting the benchmark by 9.7 points.

Berry Appleman & Leiden topped the list of firms with 101 to 250 attorneys, collecting a score that exceeded the benchmarks by a robust 22.9 points. The firm was also in that group's top five for the portion of equity partners, nonequity partners and associates who are racially diverse. Runner-up Atkinson Andelson Loya Ruud & Romo PLC cleared the benchmarks by 12.2 points.

Among firms of 100 attorneys or fewer, Diaz Reus LLP, Zuber Lawler LLP and Roig Lawyers all posted scores more than 24 points above the benchmarks. The trio have similar age in common, as all were founded between 1998 and 2003, making them young in an industry where some of the heavyweights are more than a century old. Zuber Lawler, a minority-owned firm, is the only firm in the feature to report that more than half of its equity partners are attorneys of color.

For all firm sizes, the pipeline score is best viewed as an assessment of a firm's overall headcount rather than the final word on its diversity. The underlying reasons for each score can vary, depending on the representation of minority associates, equity and nonequity partners, in relation to the total number of attorneys at each level.

Notably, this year's calculation does not take into account whether people of color hold key seats as practice area leaders, management committee members and managing partners, from which attorneys have more power to enact firmwide change. Law360 Pulse will be taking a closer look at more of the factors that shape firms' diversity and culture in upcoming data projects.

Additionally, it should be noted that the number of minority attorneys coming through the pipeline could be larger in the absence of persistent structural biases. If obstacles were removed from the paths of Black and Latino students interested in entering the legal profession, firms would have more minority students they could first hire as summer associates and then as full-time associates. Granting more opportunities to gain experience and contacts could motivate associates of color to remain in the BigLaw pipeline for longer periods because there's more room for career advancement.

But this year's new pipeline ranking should provide firms with achievable targets for a more equitable breakdown in their attorney hierarchy.

Methodology
The breakdown of minority representation among firms' 2020 attorneys is evaluated as follows:

First, firms' portion of associates belonging to an underrepresented racial or ethnic group is compared with the 2012–2019 portion of minority JD degree recipients from all law schools accredited by the American Bar Association. We calculate that figure as 28.5% when non-U.S. residents are omitted, since the ABA doesn't provide any details about their backgrounds. The eight-year window accounts for the fact that the given firm's associate tier can include attorneys who have worked in that role for more than half a decade. The number of accredited law schools varied slightly over the eight years, but always spanned from 200 to 205 in total.

Next, firms' 2020 portion of nonwhite nonequity partners is compared with the portion of minority nonpartners across Law360 headcount survey submissions for 2017–2019. This benchmark comes out to 22.1%.

Benchmarks were subtracted from the rate of minority attorneys at each level. We then added the results for the three categories at two-tier firms, weighting each level by its portion of the firm's total partners and associates. Other lawyers, such as counsel and staff attorneys, were not included in the calculation. The exercise is similar for one-tier firms, where the nonequity partner comparison is left out. Firms that elected not to provide a racial and ethnic breakdown of their attorneys or refrained from splitting up partner data for the equity and nonequity levels were omitted from the Diversity Snapshot.

To pose an example of the calculation, say that half of a firm's evaluated attorneys are associates and the other half are equity partners. If one-quarter of associates and partners at this one-tier firm identify as a person of color, it would mean that their associate diversity is 3.5 points behind the benchmark of 28.5%, while their equity partner score comes out five points ahead of the benchmark of 20%. Each group of attorneys gets weighted by half, bringing the firm's added and rounded score to 0.8 points ahead of the benchmarks.

Data for all firms is as of Dec. 31, 2020. Any firms that have merged since then are listed by their prior names.