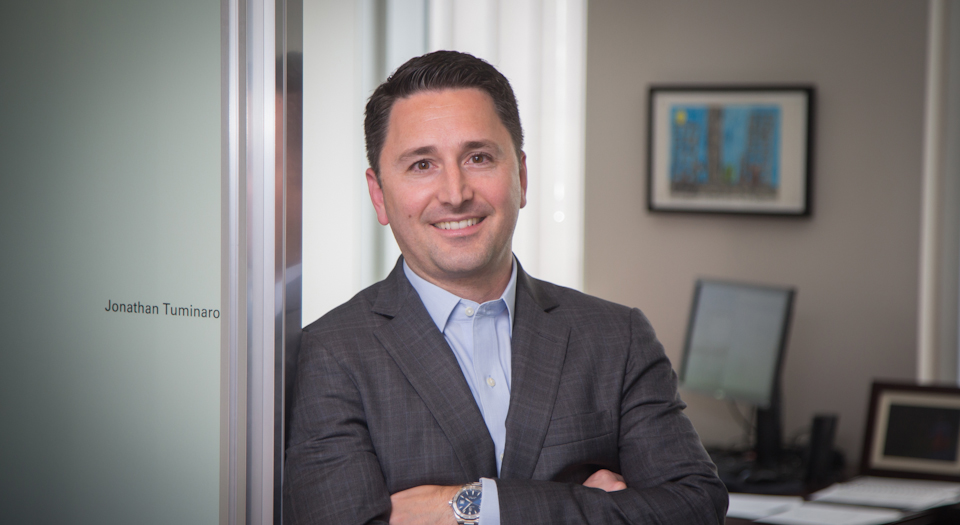 Jonathan Tuminaro, Ph.D. is a director in the firm’s Trial & Appellate and Electronics practice groups, and focuses his practice on patent litigation at the United States International Trade Commission (ITC), the U.S. district courts, and the Patent Trials and Appeals Board (PTAB). Jonathan has served as counsel in nearly a dozen ITC investigations, dozens of district court cases, and over 50 PTAB proceedings. He has defended patents that led to judgments worth nearly $25M, and has defended against patents where the damages were alleged to exceed $50M. Every year since 2015, Jonathan has been selected to the Washington, DC “Rising Stars” list in IP litigation by Super Lawyers.

Jonathan consistently obtains successful results. For example, this past year, Jonathan successfully defended five patents involved in high-stakes patent litigation relating to consumer products that were challenged in seven different post-grant review proceedings. In three of these proceedings, the PTAB denied institution of trial, and in the other four proceedings, the PTAB confirmed the patentability of all challenged claims in Final Written Decisions. Thus, every single challenged claim of all five patents was successfully preserved. Similarly, during the prior year, Jonathan defended seven software patents that were challenged in 14 different inter partes review (IPR) petitions. The PTAB ultimately denied institution of trial in all 14 IPR petitions, preserving all challenged claims in all seven patents.

Jonathan regularly publishes and speaks on patent-litigation matters. He is a contributing author of Patent Office Litigation, Second Edition (published 2017), co-authoring a chapter on the interplay between PTAB proceedings and investigations at the ITC. Jonathan is also a contributing author of Evidence in Patent Cases (published 2018), co-authoring a chapter on “Evidence Issues in Investigations at the United States International Trade Commission.” He also has extensive experience handling economics issues in patent litigation—including domestic industry at the ITC, damages in district court, and objective considerations at the PTAB.

Before becoming a practicing attorney, Jonathan received his Bachelor’s degree in physics and mathematics from Canisius College, and was a member of the ’95-’96 Men’s Basketball team that won the Metro Atlantic Athletic Conference Tournament and earned an automatic bid to the NCAA Division I Men’s Basketball Tournament. He then went on to earn a Master’s degree and a Ph.D. in physics from the University of Maryland. He received his J.D. from George Mason University.