Words Matter in a Design Patent

It is important for petitioners and patent owners alike to understand the implications of Curver Luxembourg v. Home Expressions, which relied on prosecution history and the title to limit design patent claim scope.

Claim construction for a design patent is mainly focused on the drawings—after all, the drawings show the ornamental design that is protected. But the Federal Circuit recently identified one situation where the drawings weren’t enough to define the scope of a design patent’s claim. The scope of the claim at issue in Curver Luxembourg v. Home Expressions was limited not only by its drawings, but by the patent’s title as well. With attention to the Curver decision, those seeking to understand and construe a design patent’s claim may begin to more critically consider the patent’s title, description, and claim language, as well as its drawings.

Curver’s design patent No. D677,946 claims “The ornamental design for a pattern for a chair, as shown and described.” This is the required format for a design patent claim. The specification description is minimal, describing the views of the drawings. The drawings only show a segment of material, not a chair. As required by rule, the patent’s claim matches its title: PATTERN FOR A CHAIR. 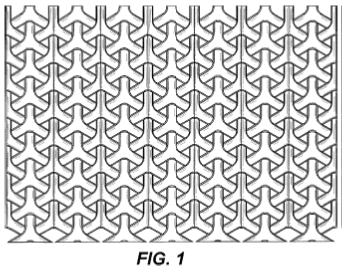 Curver sued Home Expressions, alleging that baskets incorporating the patented pattern infringed the ’946 patent. Home Expressions argued that the scope of Curver’s patent is not broad enough to cover any article made from the patented pattern, but is limited to chairs, based on its title and claim language. Curver argued that its patent should be interpreted based on its drawings alone—which do not show a chair—and that it thus covers the depicted design applied to any article. Curver lost, first at the district court, then at the Federal Circuit.

It might seem natural that Curver’s patent be limited to a chair—after all, “chair” is in the claim. But this outcome was not certain. Traditionally, in construing the scope of a design patent, courts have focused mainly on the drawings, rather than the language, of the patent. But the Federal Circuit considered this to be a case of first impression, because it found no article evident in the drawings. (A design patent is granted on a design applied to an article.) Lacking a depicted article, the Court found it appropriate to look to the language of the patent to limit its scope to a pattern for a chair. (“We hold that claim language can limit the scope of a design patent where the claim language supplies the only instance of an article of manufacture that appears nowhere in the figures.”).

Though the Curver decision breaks some new ground in the way that it limits a design patent’s scope to a particular article type only identified in the patent’s text, this does not necessarily mean that text will be similarly relevant to interpreting every design patent. The Court encountered the unusual situation where it could find no article depicted in the drawings, and only then looked to the text to identify an article to which it could restrict the scope of the design patent’s claim. In most cases there should not be a similar need to import limitations from outside the drawings. But those seeking to invalidate—or defend—the rare design patent without a clear article depicted in its drawings may want to take account of the type of article recited in the claim when considering prior art, rather than relying only on similarity in appearance.

Applying these insights to the PTAB, remember that claim construction at the PTAB for design patents is the same as claim construction in district court. So if you are filing or defending an IPR targeting a design patent, it is imperative that your team knows and understands that the title and amendments made during prosecution can be limiting, not just the claimed figure.

This article appeared in the September 2019 issue of PTAB Strategies and Insights. To view our past issues, as well as other firm newsletters, please click here.