This article first appeared in Law360.

This article explores why petitioners are struggling to challenge design patents at the PTAB, particularly at the institution stage, and what the strategic implications may be from an enforcement standpoint. At a time when many patent holders are facing setbacks in litigation because of the PTAB, design patent holders may be in the opposite position — avoiding the uncertainty of a stay while gaining leverage by having survived an upfront prior art challenge before the U.S. Patent and Trademark Office. At the systemic level, these statistics speak to the ability of design patents to withstand post-grant scrutiny, a fact that reflects positively on the quality of original examination.

Given that the standard for instituting trial is lower than the standard for ultimately proving unpatentability, these numbers tell the notable story that design patents are escaping the trial process more than half the time, despite the bar being lower for the challenger at that stage.[3] 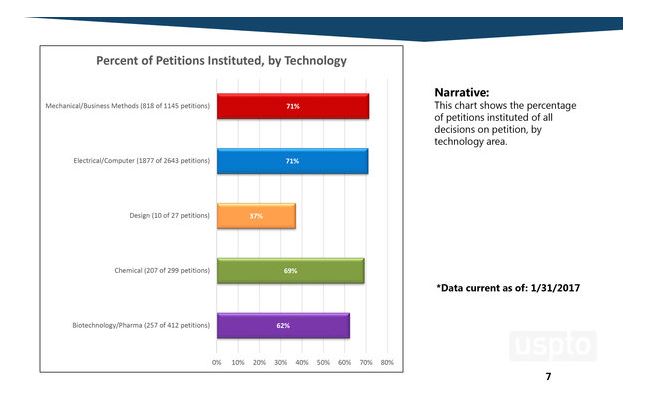 Of instituted trials, design patent claims have been found patentable 14 percent of the time, which is more than every other technology area with the exception of biotech-pharma. 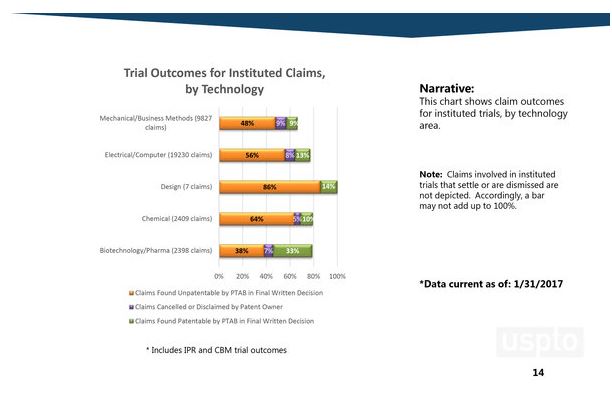 First, focusing on the measurement of “claims found to be patentable,” the survival rate for biotechpharma claims is by far the highest (33 percent). But design patent claims are surviving at a higher rate than mechanical/business methods (9 percent), electrical/computer (13 percent), and chemical (10 percent). Thus, proportionally, design patent claims are being found patentable more than most. Second, a numerical dynamic may be at play. Design patents only have a single claim defined by the patent drawings.[5] That claim is roughly analogous to the base independent claim in a utility patent. Unlike utility patents, design patents cannot have multiple claims of narrower scope. Indeed, the ability of narrower dependent claims to be distinguished from the prior art during trial accounts for a significant proportion of claims that end up surviving instituted post-grant proceedings in the utility context. A survey of the last 10 final written decisions resulting in findings of no unpatentability indicates that the ratio of surviving independent claims to dependent claims is 38 to 220, or roughly one to six.[6] Accordingly, utility patents having dependent claims of narrower scope would be expected to have a higher “claim” survival rate.

A third factor distorting the comparisons shown in this chart is that the design category is not missing any outcome data due to “claims involved in instituted trials that settle” or due to claims being “cancelled or disclaimed” during trial. A negative inference can be drawn that, absent voluntary settlement or disclaimer, those missing utility claims would have been found unpatentable in a final decision. That would add 43% more “claims found unpatentable” to the mechanical/business method category (91 percent), 31 percent to the electrical/computer category (87 percent), 26 percent to the chemical category (90 percent), and 29 percent to the biotech/pharma category (67 percent). Thus, with that negative inference taken into account, design patents appear to be on par with the other areas of technology in terms of unpatentability outcomes, with the exception of biotech-pharma.

Design patents are surviving post-grant challenges because their claims are strong in terms of patentability, disproving the misconception that they are vulnerable to prior art attacks.

Each type of challenge above is associated with a standard unique to design patent law. First, the test for determining anticipation of a design patent is the “ordinary observer” test, which provides that a design claim is unpatentable if, “in the eye of an ordinary observer, giving such attention as a purchaser usually gives, two designs are substantially the same, if the resemblance is such as to deceive such an observer, inducing him to purchase one supposing it to be the other.”[7] In general, petitioners are failing the ordinary observer test because the overall appearance of the prior art has noticeable differences when compared to the claimed design. This was often the case because the PTAB disagreed with the petitioner that differences were “trivial” as opposed to “noticeable.”[8] On more than one occasion, this finding depended on a claim construction that dictated whether the feature was, or was not, part of the patented design.[9]

Third, priority entitlement requires determining whether the claimed design finds written description support in the parent patent application disclosure. Support is defined as “whether the disclosure of the application relied upon reasonably conveys to those skilled in the art that the inventor had possession of the claimed subject matter as of the filing date.”[13] While the possession standard applies equally in the design and utility contexts, “[i]n the context of design patents, the drawings provide the written description of the invention. Thus ... one looks to the drawings of the earlier application for disclosure of the subject matter claimed in the later application.”[14] In post-grant proceedings, petitioners often challenge priority to assert intervening art.[15] Petitioners may also challenge priority to argue that a patent is eligible for post-grant review, which requires an effective filing date on or after March 16, 2013.[16] Both situations have arisen in design patent challenges at the PTAB.[17] Incidentally, the first post-grant trial initiated against a design patent was the result of a successful priority challenge relying on the applicant’s own intervening art.[18] Since then, however, petitioners have challenged priority seven times and, in every instance, they have failed. These priority challenges, which involve challenging written description support in a parent patent application, are failing because of an overemphasis on minor differences between the claimed design and the prior disclosure and/or a failure to view the claimed design as a whole when looking to the prior disclosure for signs of possession.[19]

The ability of design patents to withstand post-grant scrutiny reflects the quality of original examination, which is often criticized as being less rigorous than in the utility context.

The analysis of failed obviousness and anticipation challenges above does not take into account the number of prior art references that are asserted in support of each challenge. Given that petitioners are challenging only a single claim, they are at liberty to use the full word count to cast a wide net and propose multiple grounds of unpatentability against that single claim. Petitioners also have the luxury of space to develop background and provide detailed explanations. Rather than word limits, the difficulty petitioners are having in successfully challenging design patents seems to come from their failure to assert prior art that is similar enough to the claimed design. Other signs of this are the efforts by petitioners to challenge priority entitlement and assert intervening art. Ultimately, these difficulties support that design patents are not inherently more vulnerable to prior art attacks than their utility counterparts.

In addition to undermining the misconception that design patents are more vulnerable to prior art attacks, these statistics reflect positively on the quality of original examination. In one notable example, the board denied institution based on 35 U.S.C. § 325(d), which gives the board discretion to deny institution if “the same or substantially the same prior art or arguments previously were presented to the Office.”[20] In that case, the board found that the asserted grounds with respect to priority entitlement, anticipation, and obviousness were already considered during original examination and the board saw no “reasoning or argument as to why we should revisit the Office’s determinations.” Giving deference to findings made during original examination is fairly rare at the PTAB. As such, this exercise of discretion is notable.

A low institution rate has strategic implications from an enforcement standpoint, both in terms of avoiding a stay and undercutting the invalidity contentions of accused infringers.

From an enforcement perspective, the data shows that design patents are escaping trial at the PTAB significantly more often than their utility counterparts. This has certain strategic implications.

First, a failed attempt to challenge the validity of a design patent asserted in a parallel enforcement action will avoid a stay of the enforcement action pending review by the PTAB. Generally speaking, this is something patent holders are unlikely to experience if the PTAB institutes trial, although stay rates vary widely depending on the jurisdiction.

Second, any failed patentability challenge before the PTAB, given its more generous claim construction standard and burden of proof, is likely to chill confidence in any invalidity contentions before the district court. Third, surviving institution suggests that there is not a substantial question of validity, something that may help secure a preliminary injunction or promote settlement.

In sum, the strength of design patents, and their notable ability to survive post-grant attacks before the PTAB, is good news for patent holders at a time when so many are facing major setbacks, both at the PTAB and in district court. That quality examination has yielded strong and enforceable design patent rights reflects positively on that system as a whole.

This article appeared in the April 2017 issue of The Goods on IP. To view our past issues, as well as other firm newsletters, please click here.