US District Courts: No Slowdown in Filings

Since 2010—with the exception of outlier year 2016 (with 310 new filings!)—the number of cases filed annually in US district courts asserting US design patents has remained fairly steady: between 236 (in 2019) and 293 (in 2017). A range of only 57 cases separates the busiest and slowest filing years. 2021 was no different with 254 new design patent cases filed.

In terms of decisions, 2021 saw over 70 US district court decisions, across a wide range of venues, involving US design patents. We summarize below two of the most noteworthy decisions – Junker v. Medical Components, Inc. and Golden Eye Media USA, Inc. v. Trolley Bags UK Ltd.

The decision in Junker followed a bench trial, and the decision in Golden Eye followed summary judgment briefing. Each of these decisions are currently on appeal at the US Court of Appeals for the Federal Circuit. We expect both appellate decisions to be contenders for our firm’s Federal Circuit review report next year. Predicting what will happen on appeal can be difficult, but we would not be surprised if at least aspects of the decisions are reversed or remanded. As noted below, the functionality part of the Golden Eye decision seems particularly vulnerable to remand. These are certainly cases to watch to see whether the Federal Circuit affirms, reverses, or remands.

In addition to the Junker and Golden Eye decisions, other 2021 district court decisions of note include:

Junker alleged that four of Medical Components, Inc. and Martech Medical Products, Inc.’s (“Medical Components”) products infringe design patent D450,839, which is directed to the handle design of a medical device used to insert a catheter into a patient’s vein (referred to as an introducer sheath). Medical Components, in turn, alleged that the patent was both invalid due to incorrect or incomplete inventorship, anticipation, obviousness, and a primarily functional design and unenforceable due to inequitable conduct. The patent had previously been litigated against different defendants and found infringed and not invalid—a decision that was upheld by the Federal Circuit on appeal. The patent was also the subject of a reexamination proceeding at the PTO, which also upheld its validity. 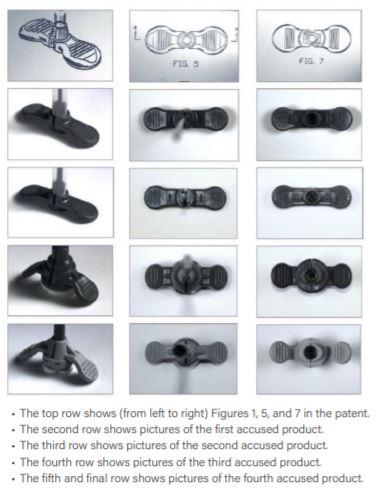 Following a bench trial, the district court judge found infringement, that invalidity and inequitable conduct had not been shown, and awarded damages. The court credited Junker’s expert over Medical Components’ expert, who the court noted had never opined on a design patent before. The court concluded that the ordinary observer would not focus on the differences identified between the patented design and the accused products—including the shape and curvature of the ears as well as the numbers of ribs on the proximal and distal surfaces of the ears—when making a purchasing decision.

Quoting Junker’s expert, the court stated that to “the ordinary observer, who is usually a nurse or the supporting staff at a hospital, the minor differences between the Accused Products and the claimed design would ‘just not [be] important enough.’” Rather, according to the court, “[a] purchasing agent gathers a bunch of people around to give quotes on things at a sales point, and it goes through the system with nobody ever really looking at it very much to see what it is.” The decision reinforces the significance of the identification of the ordinary observer and the time and attention that ordinary observer is likely to give to purchasing decisions.

Golden Eye Media USA, Inc. brought a declaratory judgment action that it did not infringe Trolley Bags UK Ltd. and Berghoff International, Inc.’s (“Trolley Bags”) design patent D779,828 and that the patent is invalid, along with other non-patent claims. Golden Eye then moved for summary judgment arguing, in regards to the patent claims, that there was no infringement because its product design is plainly dissimilar from the patented design and that the patent is invalid as functional, obvious, and indefinite.

The Court granted Golden Eye’s motion for summary judgment concluding (1) the patent is invalid as (a) functional and (b) obvious (although denying the motion as to indefiniteness) and (2) even if the patent is valid, Golden Eye did not infringe. Figures 1 and 4 of the patent, showing the claimed design, are reproduced below for reference. 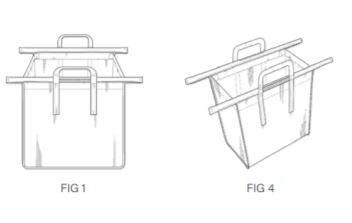 Regarding functionality, the court concluded that (1) the patented design represents the best design; (2) alternative designs would adversely affect the utility of the product; (3) there are concomitant utility patents; (4) the patentee’s advertisements tout particular features of the design as having specific utility; and (5) the color and logo of the product appear to be the only elements in the design or overall appearance clearly not dictated by function. The court stated that these factors weigh in favor of a conclusion that the patentee’s product is dictated by function, concluding that the size, handles, poles, and mesh in particular “all appear to serve primarily functional rather than ornamental purposes.”

The court noted that the Doyle prior art reference is a patent that, like the patent at issue, is owned by Trolley Bags, but said neither party addressed this issue in the summary judgment briefing. Figure 1 from the Doyle prior art reference is reproduced below on the right beside Figure 1 of the patent. The Court found that a designer of ordinary skill in the art would have thought to combine the numerous prior art that highly resembles the patent to create the product claimed in the patent and, therefore, that the patent is invalid as obvious. 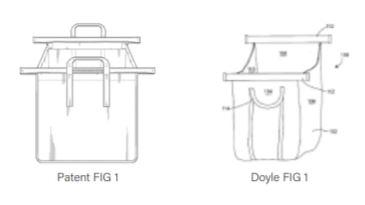 Finally, regarding infringement, the court stated that while, in the absence of prior art, the patented design and Golden Eye’s product appear substantially similar, after considering the prior art, summary judgment of non-infringement is warranted. The court concluded that the features that distinguish Golden Eye’s product from the patent—including a mesh translucent feature, an additional carrying handle, and detailed handle stitching extending down the vertical length of the bag—are present in the prior art (in particular the Doyle prior art reference and a second reference referred to as RCD 0001). Side-by-side images of Figure 1 from the patent (on the left), Golden Eye’s product (in the center), and the prior art (on the right) are reproduced below for reference. 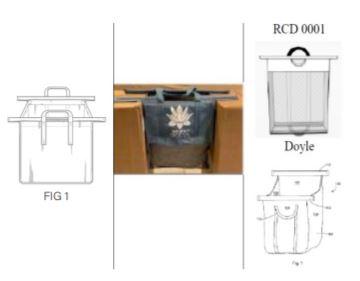 Additionally the court found that any features Golden Eye copied from the patentee’s design were functional and not protectable.

As noted above, predicting what will happen on appeal can be difficult, but we would not be surprised if at least the functionality part of the decision is remanded on appeal, because the Court’s analysis appears to conflate the article itself having a function (which is permissible, and is in fact a prerequisite of design patentability) with its overall design being dictated by the article’s function. This appears to be out of step with Federal Circuit case law, such as High Point Design LLC v. Buyers Direct, Inc., 730 F. 3d 1301 (Fed. Cir. 2013).

This article appeared in the 2021 Design Patents Year in Review: Analysis and Trends report.