Strategies For Protecting Biotechnology In Brazil And China

Global competition for clean and sustainable processes using renewable resources as raw material drives many companies to leverage biotechnology. Over the next decade, biotechnology is estimated to contribute to 35 percent of the output of chemicals and other industrial products, to 80 percent of pharmaceuticals and diagnostic production, and to 50 percent of agricultural output. Patents play a key role supporting biotechnology companies, but navigating global intellectual property systems can be a complicated exercise for even the most seasoned innovators.

Many countries have created means for quickly advancing applications encompassing green technologies in an effort to promote environmentally friendly innovations. In addition, enforcement and patent challenge options have gained new interest along with the accelerated examination options. While the U.S. and Europe are at the forefront of the growing bioeconomy, Brazil and China have taken important steps to become significant contributors to the future success of the bioeconomy. Understanding options for quickly procuring and challenging patents in Brazil and China can be a key to companies looking to expand their bioeconomy investments outside the U.S. and Europe. Below we discuss several considerations for navigating the Brazilian and Chinese patent systems with a goal of maximizing return on investment.

Like the U.S. and Europe, both China and Brazil offer accelerated examination options that greatly reduce the average pendency of an application. Brazil stands as the largest economy in Latin America, though only 2.7 percent (30,219 applications) of all applications filed worldwide in 2015 were filed with the Instituto Nacional de Propiedade Industrial (INPI), the Brazilian patent office.[1] The Chinese patent office received more patent applications (1,101,864) than any other country in 2015, representing 38 percent of all patent filings worldwide. China had nearly twice as many applications filed as the United States (589,410) and over six times as many applications filed as Europe (160,028).[2] From 2014 to 2015, patent filings in China increased by over 18 percent.[3]

Brazil offers a "green patents" priority examination program that allows an applicant to dramatically reduce the time to allowance from an average of about 10 years under traditional examination to an average of about two years.[4] See Figure 1 below. Eligible green technologies include biofuels (including solid fuels, liquid fuels, biogas and biofuels from genetically modified organisms), pyrolysis or gasification of biomass, and harnessing energy from waste from human activities. Generally Brazil does not allow the patenting of living organisms (animals, plants, animal cells, or plant cells) even when modified. An exception is made for modified microorganisms, however. So microorganisms that are genetically engineered, e.g., to produce biofuels or digest biomass, would be patent eligible in Brazil. 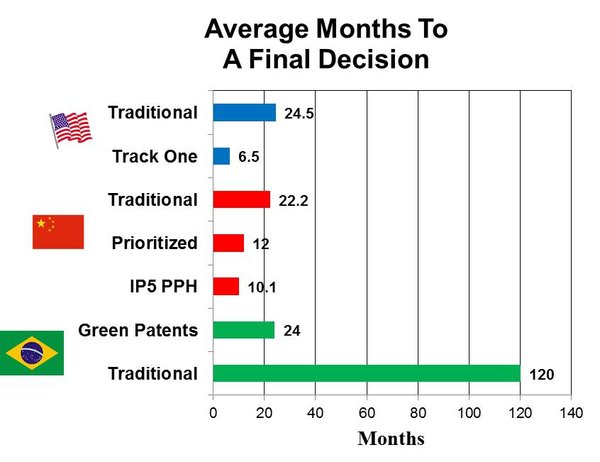 China offers two means of accelerated examination: prioritized examination program for green technologies and the IP5 patent prosecution highway pilot program.[5] An application directed to energy conservation, environmental protection or green technologies, may be eligible for prioritized examination. If eligible, an applicant need only submit a search report from another country, e.g., from the European Patent Office or the U.S. Patent and Trademark Office, and the applicant can expect a first examination report within 30 working days. A final decision in prioritized examination take an average of 12 months, which is almost half the average time under traditional examination (22.2 months).[6] See Figure 1. Under the IP5 PPH, the average time to a final decision is even faster: about 10.1 months. See Figure 1. An application is eligible under the PPH pilot program if the pending Chinese claims sufficiently correspond to one or more of the allowed or issued claims in the foreign application or patent. See Figure 2.

Applicants should consider which path of accelerated examination in China best suits their individual needs. For example, it can be risky to characterize the scope of claims, as required by IP5 PPH in the early phases of development. In addition, for enforcement purposes, an applicant may want to avoid narrowing the claims in China to the extent that they may have been narrowed in a different country. By pursuing the option of prioritized examination over PPH, an applicant can avoid these potential pitfalls. 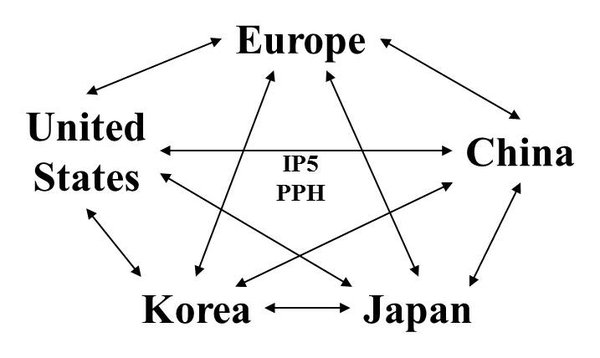 Like oppositions in Europe and post-grant proceedings in the U.S., both Brazil and China have mechanisms by which a third party can challenged a newly issued patent. In Brazil, any party can oppose an application within 60 days of publication.[7] The applicant then has 60 days to respond to the reasons for opposition. The examiner then commences examination based on the pending claims and the arguments on record. Post-grant, any party with a legitimate interest may file an administrative nullity action within six months from grant.[8] In general, the INPI will issue a nullity decision within about 60 days from receipt of the patent owner's response.

Alternatively, any person having a legitimate interest, including the INPI itself, may request a judicial nullity proceeding at any time during the life of the patent.[9] Judicial nullity actions must be filed within the federal courts of Brazil, and the INPI must participate in the proceedings.

At any time after a Chinese patent has been granted, any party wishing to invalidate an issued Chinese patent may challenge the patent through an invalidation procedure.[10] Requests are made to and decided on by the Patent Re-Examination Board. The PRB is independent from the Chinese patent office and is recognized as giving professional, unbiased decisions. Invalidity arguments presented to the PRB must be different from the reasons for objection addressed by the examiner during prosecution. Opportunities for amendment during the invalidation proceeding are extremely limited. Although the law provides that claims can be amended as long as their scope is not broadened, the established practice of the PRB is to allow only three types of amendment: combination of existing granted claims, deletion of a granted claim, or deletion of an alternative in a granted claim. The patent owner may not amend the description of an invention or utility model patent. A design patent may not be amended at all. It typically takes the PRB one year to reach a decision.

Infringement actions are filed before state courts in Brazil, while invalidity actions must be filed before federal courts and include the INPI as a defendant.[11] The average patent infringement suit takes from two to three years to reach a decision. An appeal generally takes an additional two years.

In general, an infringement case in Brazil has two phases. The first phase includes a hearing similar to a mediation. If no settlement can be reached, the case progresses to the second phase, where the parties present their witnesses, and the judge issues a final disposition on the case. Preliminary injunctions are available as a remedy, which can lessen the extent of damages during prolonged litigation.

In 2016, Brazil passed the New Civil Procedure Code, which moved Brazil's previously statute-based legal system to one that places value on court precedent.[14] The NCPC also adds additional hurdles to dissuade parties from protracted litigation, including:

2. increasing the cap on awards of attorneys' fees;

3. strengthening the role of the judge in litigation, granting greater powers for enforcing a decision, including seizure of a debtor's assets, impositions of restrictions on a debtor (e.g., blocking the ability of the debtor to make contracts with public institutions), and strengthening injunctive relief.

Brazil has an important working requirement that is different from other countries.[15] Many countries require that a patent holder actually use and/or sell its invention in the country where the patent is issued. Brazil takes this a step further by requiring that the invention is manufactured in Brazil. Article 68 is interpreted to mean that if the product is manufactured outside of Brazil and imported into Brazil, a third party may be permitted to also import the patented product through a compulsory license. So patent holders should consider the risks associated with Article 68 when deciding where to manufacture products destined for Brazil.

A patent holder has three venues for enforcing its patent rights in China: the patent office (SIPO), civil courts and the General Administration of Customs (GAC).[16] See Figure 3. 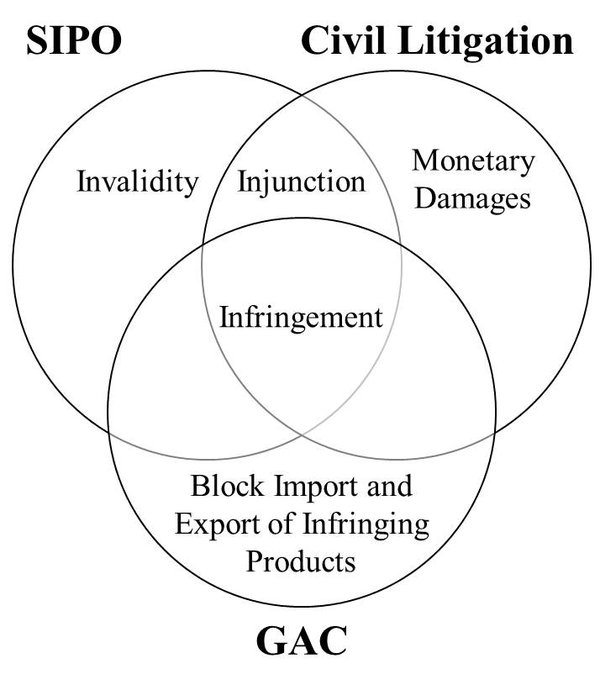 The third option — enforcement through the GAC — is particularly noteworthy. The patent holder must first register the patent with the GAC before bringing an action. In some ways the GAC is analogous to the U.S. International Trade Commission. However, unlike the ITC, the GAC has the power to issue injunctions not only for the import but also for the export of infringing products.

The GAC’s ability to bar a party from exporting an infringing product makes vital a thorough freedom to operate analyses before deciding to manufacture a product in China for international sales. Of the 1,101,864 filings in China in 2015, 968,252 filings (about 88 percent) were filed by Chinese applicants.[17] As this number alone is considerably higher than the total filings in the U.S. and EU combined, it is highly likely that many of these applications filed by Chinese applicants do not have U.S. or EU counterparts. Consequently it behooves a patent holder to conduct a targeted search for related Chinese applications or patents before deciding whether to manufacture a product in China. Failure to do so may result in a situation where a previously unidentified Chinese patent covering the product itself, a component thereof, or an element of the manufacturing process may be able to block the export of the product through the GAC. This potential problem has been referred to as a "chokepoint" for foreign companies manufacturing their products in China and should be carefully considered.[18]

Green technology and the quickly growing bioeconomy requires innovators to have a strong global IP strategy. To keep up with the pace of innovation, green-tech companies should consider options to accelerate examination while taking steps to increase the probability that issued patents are likely to stand up to a potential challenge.

Applicants should consider the value of obtaining an early patent in a country that has a respected patent office. For example, examiners in some countries will be more likely to allow an application if the same or similar claims were allowed or issued by the EPO or the USPTO. Thus, it may be useful to seek accelerated examination in Europe or the U.S., and then use the issued claims to facilitate examination in other countries. Companies should also closely monitor competitors’ portfolios in Brazil so that they do not miss the 60-day opposition window. And a thorough freedom-to-operate analysis in China may better insure against a "chokepoint" for companies manufacturing their products in China.

Deborah A. Sterling, Ph.D., and Jeremiah B. Frueauf are directors and Brian M. Dudley, Ph.D., is an associate at Sterne Kessler Goldstein & Fox PLLC in Washington, D.C.