In the U.S., Section 101 of the Patent Act, 35 U.S.C.A. § 101, governs subject matter eligibility, and states that patents may be granted to "whoever invents or discovers any new and useful process, machine, manufacture, or composition of matter, or any new and useful improvement thereof …"

In other words, inventors who make important diagnostic discoveries by, e.g., realizing key correlations between certain naturally occurring metabolites and disease states, are limited in what they can patent. The Federal Circuit's recent decisions related to natural phenomena and abstract ideas are both challenging and frustrating for innovators in diagnostics and drug discovery.

In this article, we offer an overview of decisions since Vanda Pharma v. West-Ward Pharma (2018), key takeaways and practical tips for navigating the eligibility landmines.

Under Mayo/Alice,1 the U.S. Supreme Court provided a two-step test for determining whether subject matter is patent eligible. Step one asks whether the claimed invention is directed to one of the three judicial exceptions. If yes, step two asks whether the elements of the claimed invention, considered separately or in combination, contain an "inventive concept" that is "sufficient to ensure that the patent … amounts to significantly more than a patent upon the [judicial exception] itself."

Previously, we discussed the evolution of diagnostic method § 101 patent eligibility in light of Vanda and Rapid Litigation Management Ltd. v. CellzDirect, Inc. (2016).2 Here, we explore how the U.S. Court of Appeals for the Federal Circuit has interpreted U.S. Supreme Court § 101 patent eligibility precedent with respect to biotechnology patents since Vanda.

In 2012, in Mayo Collaborative Services v. Prometheus Laboratories, Inc., the U.S. Supreme Court held that diagnostic claims are unpatentable if they "effectively claim the underlying [diagnostic] laws of nature themselves."

The Prometheus inventors had discovered a correlation between thiopurine metabolite levels and the toxicity/efficacy of thiopurine drugs. The claims at issue recited a three-step method of optimizing the therapeutic efficacy of a thiopurine drug treatment by:

(1) administering a thiopurine drug to a patient,

The Court found that the claims were merely directed to the underlying natural relationship between thiopurine drug metabolism and thiopurine metabolite levels and that, "apart from the natural laws themselves," the other claimed elements "involve[d] well-understood, routine, conventional activity previously engaged in by researchers in the field."

In addition to such claims, the Federal Circuit recognized that diagnostic claims directed to a method of treatment, rather than a diagnostic discovery itself, are patent eligible in Vanda Pharma v. West-Ward Pharma (2018).

In each of these recent decisions, the court concluded patent eligibility at step one of the Mayo/Alice test and noted that further analysis under step two was not required.

In 2015, the Federal Circuit famously held in Ariosa Diagnostics, Inc. v. Sequenom, Inc. (2015), that claims directed to the detection of cell-free fetal DNA (cffDNA) in maternal blood, to identify fetal genetic abnormalities, were patent ineligible because (1) they were directed to the natural phenomena that cffDNA existed in maternal blood, and (2) the elements of isolating, amplifying, and sequencing the cffDNA were conventional, not inventive.3

By contrast, the Federal Circuit recently found Ariosa's cffDNA claims patent eligible in Illumina, Inc. v. Ariosa Diagnostics, Inc. (2020). Ariosa's 2020 claims differed from its 2015 claims in that they were directed to a "method of preparation," rather than a natural phenomenon. One representative claim of the 2020 decision recited:

Although Ariosa discovered the natural phenomena that cffDNA is smaller than maternal cell-free DNA, the court found that the claims were directed to a method using a "human-engineered threshold" of less than approximately 300 base pairs, "rather than the natural size distributions of cell-free DNA," to selectively separate and concentrate the cffDNA.

Put another way, the inventors' method anticipated a predetermined size cutoff, rather than merely separating each sample based on its natural size distribution and removing the separated cffDNA. Accordingly, the court concluded patent eligibility at step one of the Mayo/Alice test.

A method of treating and/or preventing metabolic diseases in a patient for whom metformin therapy is inappropriate due to at least one contraindication against metformin comprising orally administering to the patient a DPP-IV inhibitor wherein the contraindication is selected from the group consisting of: renal disease, renal impairment or renal dysfunction, unstable or acute congestive heart failure, acute or chronic metabolic acidosis, and hereditary galactose intolerance.

The Federal Circuit rejected the argument that the claims at issue were "directed to the natural law that 'certain DPP-IV inhibitors … are metabolized by the liver rather than the kidney.'" The court analogized the case to Vanda and held that the inventors' claims are directed to a particular method of treatment, not to the natural laws of DPP-IV metabolism.

The claims at issue in Natural Alternatives International, Inc. v. Creative Compounds, LLC (2019) were also found to be patent eligible as directed to a method of treatment. The claims described using unnatural quantities of beta-alanine to increase beta-alanylhistidine dipeptide synthesis in the muscles and other tissues, thereby increasing anaerobic working capacity and enhancing athletic performance.

Although the inventors realized the relationship between beta-alanine and beta-alanylhistidine dipeptide synthesis, the court determined that the claimed dosages directed to a method of "increas[ing] athletic performance in a way that naturally occurring beta-alanine cannot."

In other words, the court was able to analogize the claims to Vanda because the claims were directed to a method of altering a prospective consumer's natural state to achieve a specific outcome.

'Withholding' method of treatment claims are not patent eligible

By contrast, in INO Therapeutics LLC v. Praxair Distribution Inc. (2019), the Federal Circuit held that the claim at issue, directed to a method of withholding treatment, was patent ineligible as directed to a natural phenomenon with no inventive concept. The inventors discovered that newborns with left ventricular dysfunction (LVD), who are administered inhaled nitric oxide (iNO) gas, are at an increased risk of a life-threatening pulmonary edema.

Accordingly, the claim at issue recited a method of withholding iNO from newborns with LVD. The court distinguished this case from Vanda, stating that the claim did not recite "any affirmative treatment for the iNO-excluded group." Because the court found that the claim otherwise recited only "well-understood, routine, and conventional steps," it held that the withholding of treatment claim was patent ineligible.

In each instance, the court found patent ineligible claims merely reciting a natural law or an abstract idea without "a sufficiently inventive concept."

In Roche Molecular Systems, Inc. v. CEPHEID (2018), the Federal Circuit determined that a "method for detecting" rifampin-resistant Mycobacterium tuberculosis (MTB) via conventional polymerase chain reaction (PCR) techniques was patent ineligible. Rifampin resistance can be conferred by mutations in the rpoB gene, which is present in various bacteria.

The Roche inventors discovered that MTB's rpoB gene contains a fingerprint of eleven nucleotides that is absent in other bacteria. Accordingly, the claims at issue recited use of primers capable of hybridizing to MTB's rpoB gene to amplify and detect the gene. The court observed that the primers were "indistinguishable from their corresponding nucleotide sequences on the naturally occurring DNA."

Furthermore, the court reasoned that the hybridization of the primers to MTB's rpoB gene was an entirely natural phenomenon. Because the claimed method employed otherwise conventional PCR techniques, the Federal Circuit concluded the claims were patent ineligible.

Similarly, in Genetic Veterinary Sciences, Inc. v. LABOKLIN GmbH & Co. KG (2019), a conventional "method for genotyping" Labrador retrievers to determine if they are genetically predisposed to the canine disease Hereditary Nasal Parakeratosis (HNPK), was deemed to be patent ineligible.

HNPK is a recessive condition; therefore, this genetic diagnosis is valuable for dog breeders. Despite the important observation correlating genotype and HNPK, the Federal Circuit determined that the claims were purely diagnostic because they were not directed to a method of treatment or preparation, and only used conventional genotyping methods.

The "method of assessing" claims at issue in Cleveland Clinic Foundation v. True Health Diagnostics LLC (2019) were likewise found to be purely diagnostic because they merely evaluated individuals' risk of developing or having atherosclerotic cardiovascular disease according to their myeloperoxidase levels. Again, because the method of assessment comprised conventional techniques, here conventional immunoassays, the method itself was not sufficiently transformative.

Following Alice, the PTAB previously found independent claim 1 directed to an abstract idea because the claim recited "steps for receiving and analyzing information, which humans could process in their minds, or by mathematical algorithms, which are mental processes within the abstract-idea category." Because the PTAB found that the data collection, processing, storage, and output steps "did not go beyond the well-known, routine, and conventional," claim 1 was patent ineligible.

In line with the PTAB's interpretation of Alice and the facts of this case, the Federal Circuit agreed that independent claim 1 merely provided haplotype phase information after a series of routine mathematical steps.

However, the court did leave open the door for eligibility in other cases where the new mathematical steps do result in some improvement to the functioning of the computer itself, noting that the court's analysis did not consider Stanford's arguments related to computational efficiency because they were raised for the first time on appeal.

The dependent claims, i.e., the diagnostic method claims, included the additional steps of:

(1) determining whether any stored haplotypes are associated with a disease,

(2) determining a drug for treatment, and

The Federal Circuit noted that the dependent claim limitations were "drawn to making non-specific determinations of a 'diagnosis,' 'drug treatment,' and 'prognosis' based on the haplotype phase calculation" and did nothing more than add "apply it" language "as the Supreme Court has prohibited."5 Accordingly, the Federal Circuit concluded that the dependent claims were also ineligible as directed to an abstract idea with no inventive concept sufficient to transform the claim.

After determining that a claim is directed to patent ineligible subject matter under step one of Mayo/Alice, courts must then determine whether the elements of the claim, considered separately or in combination, are inventive or merely conventional.

Although the court concluded its analysis at step one in Natural Alternatives International, Inc. v. Creative Compounds, LLC, the court suggested possible step two guidance in dicta. Creative Compounds argued that "placing a natural substance into a dietary supplement for administration to a human, in order to increase the function of tissues is a conventional, well-known activity."

In response, the court noted there was no evidence that the claimed beta-alanine dose, which was "well in excess of the normal levels of beta-alanine," was "well-understood, routine, and conventional," and that, absent a clear statement to the contrary, the court had no basis for making such a determination.

Similarly, in Illumina, Inc. v. Ariosa Diagnostics, Inc., the court concluded patent eligibility at step one but suggested, in dicta, that the size parameters Ariosa employed for separating cffDNA from maternal cell-free DNA were unconventional. The court observed that there was no evidence demonstrating that "thresholds of … 300 base pairs were conventional for separating different types of cell-free DNA fragments" and stated that "conventional separation technologies can be used in unconventional ways."

Although the court's step two analysis was not determinative to the holding of either case, these cases suggest that practitioners should consider whether their inventors' claimed dosages or method parameters may be sufficiently unconventional to overcome patent ineligibility at Mayo/Alice step one.

In other words, practitioners should consider explaining to the PTO or the courts that, although their inventors' techniques may be conventional, the specific manner in which they are employing the conventional technique is absent in the prior art.

For example, if the claimed doses or parameters have not been disclosed in the prior art, practitioners may try to argue that there is no basis for finding that the techniques are strictly conventional.

Method of treatment claims remain patent eligible, but must include an affirmative administration step, and the claimed treatment regimen must be as specific as possible and directed to achieving a specific outcome.

Finally, the Federal Circuit has suggested, in dicta, that inventive steps, which comprise using conventional techniques in unconventional ways, may be sufficient to transform patent ineligible subject matter at step two of the Mayo/Alice test. Namely, where applicable, practitioners should consider differentiating their manner of using a conventional technique from the prior art. 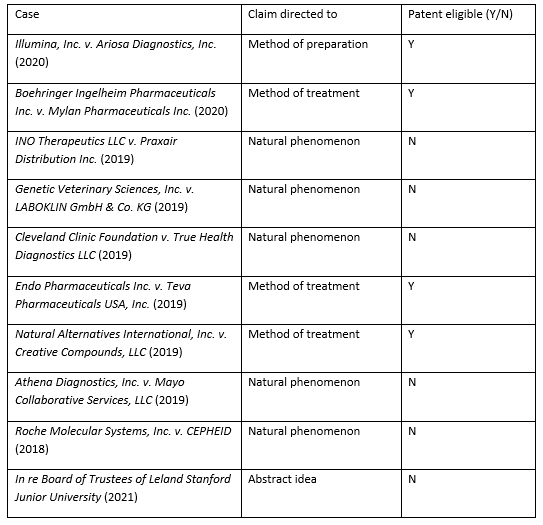