Practice before the U.S. Patent and Trademark Office has become increasingly idiosyncratic. Examination is rife with nonstandard practices and unique application of official guidance. Adept practitioners have developed workarounds to accommodate these idiosyncrasies when doing so will not prejudice their clients, but they add unnecessary cost and delay. This situation is even more acute in the examination of design patent applications, in part because many fewer rejections of design patent applications are appealed to the Patent Trial and Appeal Board than they are in utility patent applications. One reason is that the value proposition of pursuing a design application through the lengthy appeal process can be relatively low. This is because designs are often irrelevant in the marketplace by the time an appeal would be concluded. The infrequency of board guidance has left design examination to develop unmoored from the more rigorous legal analysis that the board brings to bear regularly in interpreting utility examination practices.

But with the advent of the America Invents Act’s post-grant proceedings, the board has had more opportunities than ever to issue timely public decisions addressing the standards for patentability of designs. And the board’s treatment of design patents has shown the overwhelming strength of the outcome of design patent prosecution, which is a testament to the work that USPTO design examiners and practitioners do together to ensure that only valid patents are issued. As noted in an earlier article by one of the authors, post-grant proceedings before the board seeking to invalidate design patents are denied institution at a rate of 63 percent, compared to only 30 percent for utility patents.[1] Unfortunately though, recent board decisions have revealed significant inconsistencies between how the board and the design examination corps are interpreting case law. The most noticeable is with regard to the written description requirement under 35 USC § 112 and its role in establishing a priority claim under 35 USC § 120.

The Written Description Requirement in Examination: Years of Uncertainty

In a recent series of cases, the board has had occasion to determine whether a child design patent was entitled to the filing date of its parent application under § 120, by determining whether the child design was disclosed in the parent application in a manner sufficient to satisfy the written description requirement of § 112.

This is a question that has bedeviled the design examination corps since at least 2013, when out of the blue at Design Day — an annual design patent symposium held at the USPTO with examiners, practitioner, designers, and any other member of the public with interest — the office announced that no longer would visually including the claimed elements of the child design in a parent application be enough to satisfy the written description requirement of § 112. No alternative standard was provided. Since then the office has spent four years and two rounds of requests for public comment trying to articulate a replacement standard for satisfying the written description requirement.[2] In the meantime, design examination has suffered from the uncertainty created by the pronouncement by the office. Some examiners take a rigid approach and deny written description support whenever a child application claims anything different from its parent. Others continue to apply the case law as they always have. Both situations make examination needlessly unpredictable and often prolonged and arbitrary.

The Written Description Requirement Before the Board: Consistent Clarity

The board, in contrast, has consistently relied on controlling legal precedent to find that the written description requirement is satisfied whenever all claimed elements of the design are clearly shown and delineated in the parent application. But more importantly, the board had found that exact depiction of each element in the parent application is not required. In fact, the board has strongly rejected specific micro-analyses of individual design features, instead looking at the big picture in the same way that one of skill in the art would when evaluating the design.

Rather than trying to articulate a replacement standard for satisfying the written description requirement, the board’s carefully considered treatment of § 112 standards for design should be used as a model for design examination. Two recent examples are especially instructive: Skechers v. Nike[3] and David’s Bridal v. Jenny Yoo.[4]

In five concurrent requests for inter partes review, Skechers sought to invalidate Nike’s patents covering designs for shoe soles. Each patent was a child of the same parent application, which was filed with only photographs depicting multiple embodiments of a shoe. Each patent, however, depicted its claimed design using line drawings — not photographs — in which portions were drawn in broken lines to show they did not form part of the claimed design. Skechers challenged Nike’s entitlement to claim priority to the original application, alleging that the parent application did not provide written description support for the claimed designs of the child applications under 35 USC § 112 because the child designs introduced “new matter.”

Skechers contended that the reduction of portions of the shoe to broken lines introduced new matter because “one of skill in the art viewing the parent … application would not have recognized that the design features claimed in the … patent could have been separately claimed from the embodiments originally disclosed in the parent application.”

The board recognized the absence of merit to this argument and dismissed it by acknowledging that the inventor had possession of the claimed invention because the parent application “clearly show[ed] and delineate[d] the claimed … elements of the design” even if not all of the originally disclosed design elements were claimed in the child. The board relied on the Federal Circuit’s most recent treatment of §112, In re Owens,[5] in articulating and applying this standard.

Skechers also contended that inconsistencies between the drawings of the patents and the photographs of the parent application introduced new matter. Skechers provided comprehensive comparisons between the two, one example of which is reproduced below. 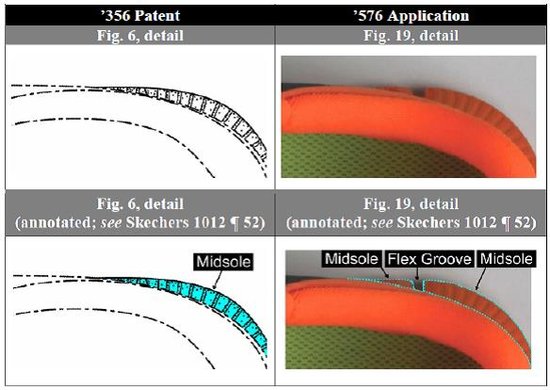 Relying on the Federal Circuit’s guidance in In re Daniels[6] and Ariad Pharmaceuticals Inc. v. Eli Lilly & Co.[7], the board acknowledged that an applicant “does not have to describe exactly the subject matter claimed” so long as “the disclosure of the application relied upon reasonably conveys to those skilled in the art that the inventor had possession of the claimed subject matter as of the filing date.”

The board rejected Skechers’ overly detailed feature-by-feature comparisons, and applied the controlling legal standard approach of evaluating the sufficiency of written description under § 112 based on the relative overall appearances and visual impressions of the claimed subject matter as a whole. In doing so, the board explained that there is a “range of reasonableness required for providing sufficient written description” that goes even beyond that which is literally and exactly disclosed.

More recently, David’s Bridal sought to institute a post-grant review proceeding to invalidate Jenny Yoo’s design patent covering a dress. Jenny Yoo’s parent application disclosed two versions of a dress: short and long. The short dress was depicted in various front, rear and side views. The long dress was depicted only in front views, albeit in different configurations. In a divisional child application to the long dress, Jenny Yoo added rear and side views of the dress, along with a front view in an alternative configuration. The added views had generally the same style as corresponding views of the short dress. 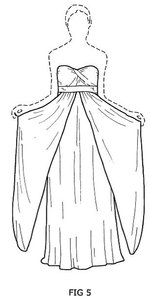 The board treated the analysis for sufficiency of written description under § 112 the same way it did in the Skechers cases, by looking at the claimed subject matter as a whole. Even though the views added in the divisional application were not explicitly present in the parent application, the differences depicted are “simply the natural result of lengthening the bottom portion of the shorter dress and convertible panels” originally disclosed. Based on the priority application, “a skilled artisan would recognize that the inventor had possession of the longer length dress and panels shown in the patent.”

Clearly, the board understands that an evaluation under § 112 for a child application is to be undertaken from the perspective of one of skill in the art, based on all that is disclosed in the parent application. The Skechers cases show that the threshold for satisfying the written description requirement is visual disclosure (i.e., any design whose claimed elements were “shown and delineated” in the parent application satisfies the requirement). Both Skechers and David’s Bridal show that a claim can even go beyond what was explicitly shown and delineated in the parent application, to extend to what was “reasonably conveyed.” In Skechers, this was drawings that did not exactly match the disclosure or claim all that was disclosed in the priority application. In David’s Bridal, this was drawings that were not included in, but could essentially be inferred from, the priority application.

Rather than trying to articulate a replacement standard for satisfying the written description requirement, the board’s carefully considered treatment of § 112 standards for design should be used as a model for design examination. If design examiners follow the board’s lead, no more office actions should issue that find a § 112 deficiency where the claimed elements of the design were shown and delineated in the parent application, even if the application claims fewer than all of the elements disclosed. Similarly, examiners will employ the same “range of reasonableness” that the board does to find greater compliance with § 112 across the board. Cutting down on the number of unnecessary office actions will allow examiners to confidently dispose of applications at a greater rate, reducing the examination backlog without compromising on quality.

Tracy-Gene G. Durkin is a director and Daniel A. Gajewski is an associate at Sterne Kessler Goldstein & Fox PLLC in Washington, D.C.