The new coronavirus, the cause of coronavirus disease Covid-19, is the third major global outbreak of a coronavirus in the past 20 years. The spread of Covid-19 brings into sharp focus the issues surrounding patenting antiviral research and preserving exclusive marketing rights for companies developing products, diagnostic assays and kits, and treatments for viral infections.

While continued research for new antivirals is extremely important for global human health, on a practical level, successfully patenting an invention to protect the inventor's intellectual property and related exclusive marketing rights are critical for companies wishing to invest in and profit from treatments for viral infections. Understanding viral mechanisms of action is essential for designing novel antiviral agents and obtaining the necessary intellectual property protection. This article explains the types of treatments used for fighting viral infections like Covid-19 and examines their patentability under U.S. law.

Viruses are intracellular pathogens that, at times throughout history, have been the source of plagues affecting human health. Viruses have developed many Machiavellian strategies to evade host immune responses and, as a result, combating viral diseases with vaccines and antiviral drugs is a constant challenge. Even when successful strategies are devised and implemented, the high rate of genetic change exhibited by many viruses renders those treatments ineffective.

Compared to bacteria, viruses have different mechanisms and machinery to survive and replicate in a host. Bacteria can reproduce on their own, whereas viruses must insert their genetic material into a host's cells to reproduce. The virus then hijacks the host cell's machinery to reproduce and fill the cell with viral particles. When the cell ruptures, the virus spreads to other cells and repeats the process.

Antibiotics used to treat bacterial infections are ineffective against viruses as there is no target to attack in a virus. Unlike most antibiotics, antiviral drugs typically do not destroy their target pathogen but instead inhibit their development and/or reproduction. To prevent a person from developing a viral infection in the first place, vaccines are used. Thus, vaccines are a preemptive first line of defense. Antiviral drugs and vaccines will be discussed in turn below.

Small molecule inhibitors typically arise out of a structure-based design of the viral target. There are many steps in a virus life cycle that can be targeted by potential antiviral drug candidates. This approach involves a detailed knowledge of viral action and lifecycle leading to different strategies for curing or treating viral disease, such as:

Novel compounds and methods of use are fairly easy to patent. Crystal forms, hydrates, and solvates are generally also readily patented.

Other types of viral inhibitors are baloxavir marboxil (Xofluza), zanamivir (Relenza), and oseltamivir (Tamiflu), which prevent the release of viral particles by blocking neuraminidase on the surface of flu viruses, and doravirine (Pifeltro), a new reverse transcriptase inhibitor.

Table 1 lists some small molecule antiviral drugs and their relevant patent claims. These are examples of compound claims routinely obtained when filing a patent application on a novel small molecule antiviral drug. Follow-on patent applications that claim solvates, crystal forms, and methods of treatment of novel drugs are also valuable because they are typically difficult to design around or invalidate. 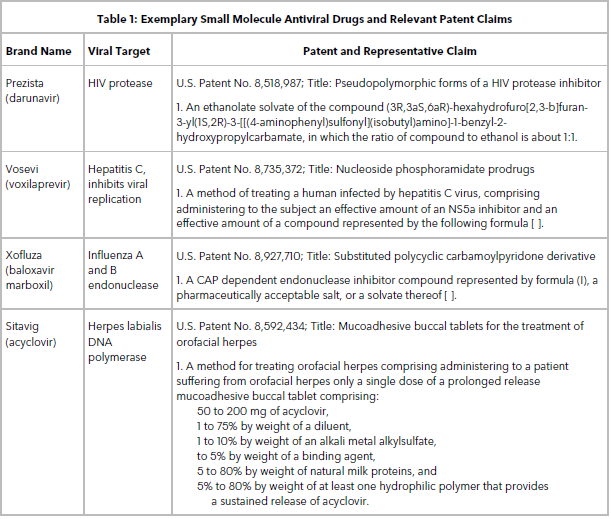 While most antiviral small molecule drugs treat acute or chronic viral infections, vaccines are a preemptive first line of defense. Vaccines stimulate the immune system to produce antibodies that remain in the body for long periods of time. Because of such long-term “immune memory,” a rapid immune response typically results upon subsequent exposure to the virus. In this way, a virus can be eradicated before it causes harm.

Developing a vaccine typically takes years and involves a lengthy process of testing on animals, clinical trials on humans, and regulatory approvals. Vaccines are more difficult and expensive to manufacture and test in human clinical trials than small molecule antiviral drugs. Despite the cost and decades of research and development necessary to design a vaccine, this research is absolutely vital for creating new viral treatments to guarantee continued global human health.

Vaccine IP is complex and characterized by multiple levels of patents, including patents directed to DNA and amino acid sequences, viral vectors, attenuated strains, formulations, culturing and manufacturing methods, methods of use, and kits and devices for vaccine administration. The various types of vaccine-related patents are generally readily obtained, assuming the requirements for patentability are met. 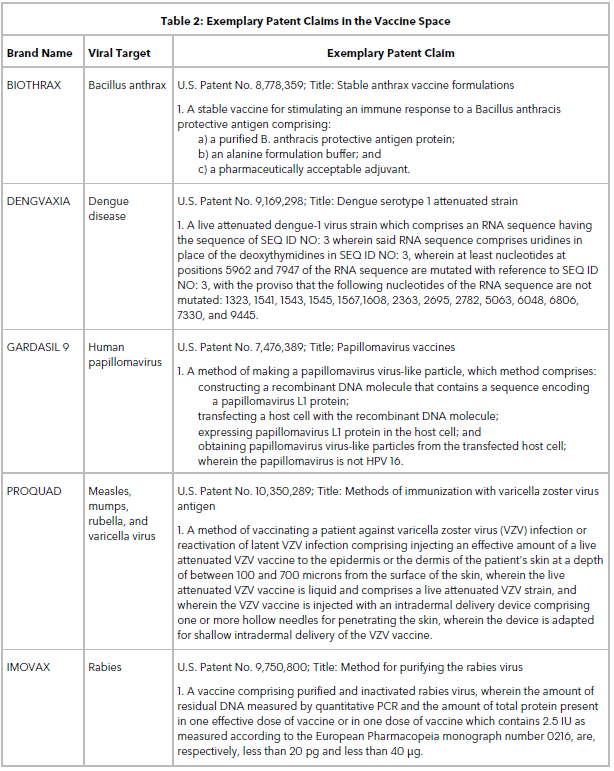 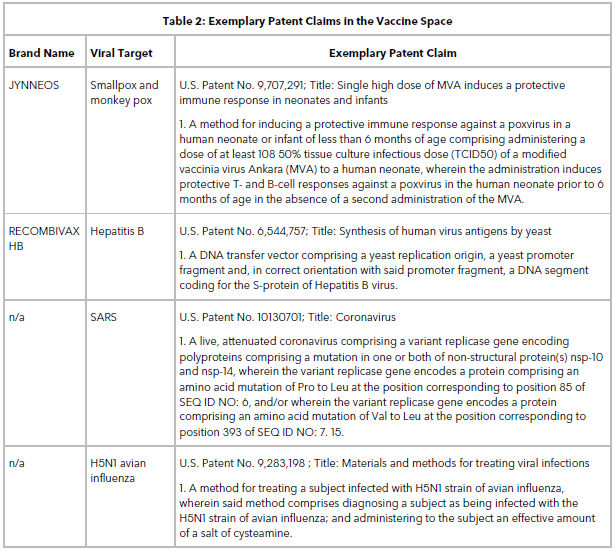 Patent attorneys and their clients looking to enter the antiviral or vaccine space must consider whether the invention at issue is likely to be eligible for patent protection.

Novel compounds are patent eligible because they do not exist in nature. Other forms of these compounds, such as crystal forms, hydrates, and solvates, as well as methods of treatment, are also eligible and patents are generally easily obtained. A new use for an old compound is typically patentable assuming the use is novel and nonobvious. For example, numerous antivirals, such as HIV drugs, have entered clinical trials to test whether they can be used safely and effectively against the current coronavirus, and patent applications have been filed for the new use.

Claims directed to a newly discovered, wild-type strain of a virus are not patentable in the U.S. This is because a product of nature, i.e., a wild-type virus strain not modified by humans, is not eligible for patent protection. However, a genetically modified viral strain that differs structurally from the wild-type virus is patentable.

Claims directed to a vaccine composition comprising an antigenic peptide and a pharmaceutically acceptable carrier, such as water, are not patent eligible because each component is a product of nature. While the mixture of these two naturally occurring components is novel, there is no indication that mixing these components changes the structure, function, or other properties of the peptide or water in any marked way. Instead, the peptide retains its naturally occurring structure and function, and is merely dispersed in the water, which also retains its naturally occurring structure and function. Thus, the claim as a whole would not amount to significantly more than each “product of nature” by itself and does not qualify as eligible subject matter because their combination is well-understood, routine, and conventional in the field.

In contrast, claims directed to a vaccine composition comprising an antigenic peptide and a pharmaceutically-acceptable carrier selected from the group consisting of a cream, emulsion, gel, liposome, nanoparticle, or ointment, would be patent eligible because the plain meaning of each carrier recited in the claim requires that the carrier have structural and physical characteristics that distinguish it from the closest counterpart in nature.

The patentability of in vitro diagnostic methods, i.e., using a biological sample isolated from a patient, is in flux in the U.S. Medical diagnostics claims continue to be struck down by U.S. courts on the ground of subject matter ineligibility. However, the application of diagnostic results, even in conventional and routine ways, may be patentable. In other words, method of treatment claims that practically apply natural relationships are considered patent eligible under 35 U.S.C. §101.

Innovation and new drug approvals are sorely needed to prevent viral outbreaks or treat viral infections. It is concerning that fewer companies are investing in the development of vaccines. To incentivize innovation and research and development, the role of global agreements should be explored, similarly to the so-called Pandemic Influenza Preparedness Framework, which rewards countries for sharing viruses with human pandemic potential in order to further research that will aid preparedness and response. Additional agreements similar to the PIP can be created for global viral outbreaks, such as the Covid-19 coronavirus. However, without gaining exclusive IP protection and marketing rights for a significant period of time, profit-minded companies will have little incentive to invest in the research and development necessary to develop diagnostics, vaccines, and antiviral medications.