For Partial Design Patents and Utility Patents Alike, Reliance on Objective Indicia Requires Evidence of a Nexus to the Unique Claimed Features

In Campbell Soup Co. v. Gamon Plus, Inc.,[i] the Federal Circuit considered the Patent Trial and Appeal Board’s application of objective indicia to design patent claims. The Board had found that the prior art has the same overall visual appearance as the claimed designs, but that it is outweighed by objective indicia of nonobviousness. The Court, however, found that substantial evidence did not support either the Board’s presumption of nexus or the Board’s finding of nexus.  The Court thus reversed the Board’s decision and held that the challenged claims were unpatentable.

The Court first considered whether the evidence supported the Board’s finding that U.S. Design Patent No. D405,622 to Linz creates basically the same overall visual appearance as the claimed designs. A side-by-side of the claimed aspects of the designs (removing the broken lines) on the left and Linz on the right is shown below. The Court found no reason to disturb the Board’s finding. 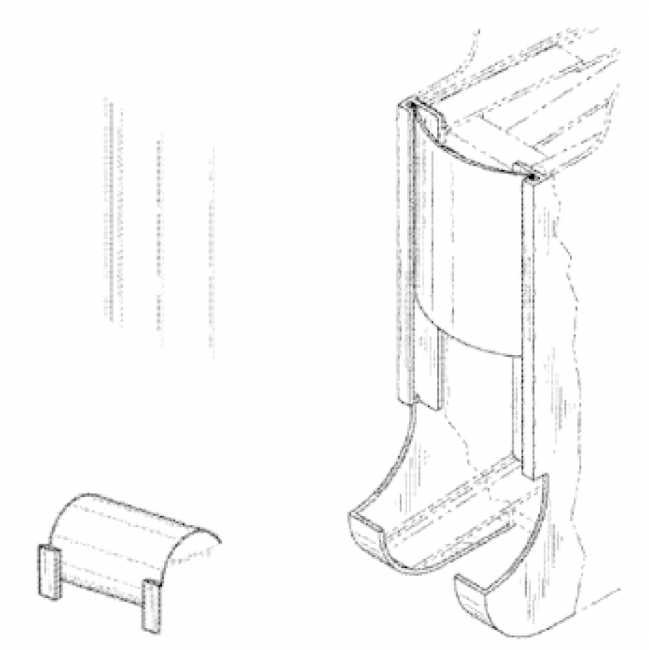 The Court next turned to the nexus analysis. The Board had found both a presumption of nexus and a nexus-in-fact between the claimed designs and the patentee’s evidence of commercial success and praise.

Regarding a presumption of nexus, the Court explained that the presumption only applies if the product alleged to be a commercial embodiment of the claims is coextensive with the claimed invention. The Court stated that the coextensive analysis is not limited to whether unclaimed features are ornamentally insignificant but—as with utility patents—considers whether there are functionally significant unclaimed product features (even if they not ornamentally significant). Here, given the limited aspects of the claims shown with solid (as opposed to broken) lines, the Court found that the claims cover only a small portion of the commercial product and that the product includes significant unclaimed functional elements. In such cases, the presumption does not apply. Thus, the Court held that substantial evidence did not support the Board’s presumption of nexus.

Turning next to nexus-in-fact, the Court stated that absent a presumption of nexus, nexus can also be shown if the objective indicia are the direct result of unique characteristics of the claimed invention (rather than a feature that was known in the prior art). The Court stated that the Board only found four features that distinguished the claimed designs from the Linz prior art. The Court held that, in order to establish nexus, the patentee would have needed to present evidence that the objective indicia derived from those four “unique characteristics.” The Court found that the patentee failed to do so, presenting instead evidence linking the objective indicia to aspects of the commercial product that were already present in the prior art. Thus, as with the presumption, the Court held that substantial evidence did not support the Board’s finding of nexus-in-fact.

Takeaway: For utility patents and design patents alike, if the claims are directed to partial or limited aspects of the commercial product, reliance on objective indicia requires evidence of a nexus to the unique characteristics of the claims (i.e., what is new over the prior art).