The current decade began with the Supreme Court issuing a decision clarifying that there is more than one test for patent eligibility. In Bilski v. Kappos,[2] the court overturned a Federal Circuit decision concerning the “machine-or-transformation” test, which required that a patentable process either be tied to a machine or apparatus or involve a transformation of a particular article into a different state or thing. The Bilski court determined that neither the Patent Act nor Supreme Court precedent supported the "machine-or-transformation" test as the sole test for deciding which processes are patent-eligible.[3] Rather, the court found the machine-or-transformation test to be "a useful and important clue … for determining whether some claimed inventions are processes under § 101."[4] However, any hope for clarification and/or expansion of the scope of patent eligibility was short-lived.

Beginning with the March 20, 2012, Supreme Court decision in Mayo Collaborative Services v. Prometheus Laboratories,[5] the court has addressed the scope of these judicial exceptions; establishing a two-part framework for distinguishing patents that claim judicial exceptions and patents that claim patentable applications of those ideas.[6],[7],[8] Courts look for an “inventive concept,”[9] such that the invention is directed at something “significantly more”[10] than a natural phenomenon, law of nature, or abstract idea. Patent eligibility is based on the two part Mayo test: (1) determining whether the claims are “directed to” a judicial exception; and (2) determining whether the claim’s elements, considered both individually and as an ordered combination, contain an “inventive concept” sufficient to transform the nature of the claims into a patent-eligible application.[11]

Most claims adjudicated by the Supreme Court and Federal Circuit under 35 U.S.C. § 101 within the last five years have been invalidated. The decision in Rapid Litigation Management v. CellzDirect[12] stands out as one of the few Federal Circuit decisions upholding claims as patent-eligible. The claims in CellzDirect were directed to a method of preserving hepatocytes capable of withstanding multiple freeze-thaw cycles. Previously, researchers were only able to freeze hepatocytes once, limiting their utility. Although the claims relied on the innate ability of some hepatocytes to survive multiple freeze-thaw cycles, the court found that the “desired outcome” or “end result” was not directed to a law of nature. Instead, the claims were directed to “a new and useful laboratory technique,” and therefore the claims were deemed patent-eligible.[13]

Some district courts have also considered CellzDirect’s “desired outcome” or “end result” rationale as part of their patent-eligibility analysis. In Momenta Pharmaceuticals v. Amphastar Pharmaceuticals,[14] the district court concluded that the asserted claims were patent eligible because the end result was a “new and useful method” to ensure the quality of a drug rather than a law of nature.[15] In contrast, the district courts in Athena Diagnostics v. Mayo[16] and Cleveland Clinic Foundation v. True Health Diagnostics[17] found that the claimed subject matter was not patent eligible because in each case the “end result” was a detection method that was merely the observation of a natural law and did not produce something useful beyond the diagnosis.

We have analyzed district court litigations in the life sciences from June 13, 2013, through June 26, 2017.[18] During that period, 26 sets of biotechnology-related patents[19] were adjudicated for patent eligibility in 29 orders (some patents were challenged at multiple stages of litigation), and slightly more than half of all challenged patents survived. (See Figure 1.)

Figure 1: Outcome of cases in which patents were challenged for § 101 subject matter eligibility. 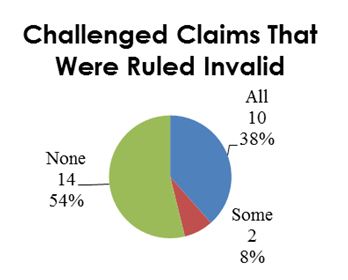 District courts have addressed subject matter eligibility throughout every step in the litigation process (See Figure 2). In every case where a claim survived an early § 101 challenge, the claim was subsequently affirmed after trial, or the issue was not raised again. All decisions issued after trial declined to find that the patents-in-suit were directed toward patent-ineligible subject matter.

Figure 2: Stage of litigation in which § 101 subject-matter eligibility was addressed. Numbers indicate how many decisions were issued at each stage. 12(b)(6) is a motion to dismiss for failure to state a claim upon which relief may be granted. 12(c) is a motion for judgment on the pleadings. 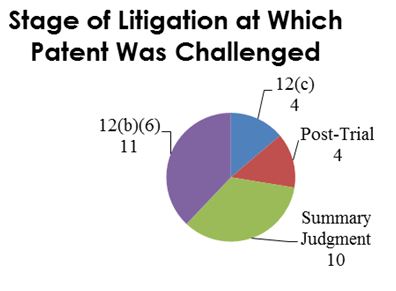 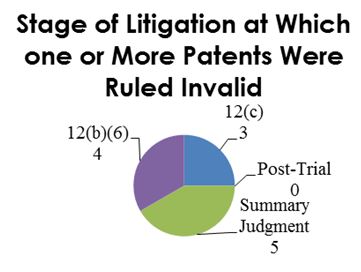 Most challenged patents involved methods of diagnosis, measurement, or treatment (See Figure 3). Diagnostic methods were more likely to be invalidated in district court than were treatment methods. Some of those diagnostic methods that were not invalidated survived because the court deemed the methods to be a significant improvement over existing techniques.

Figure 3: Type of patents challenged and their outcomes in district court. Cases involving claims for both a method and materials for performing that method are categorized as methods unless the court analyzed their § 101 eligibility separately. 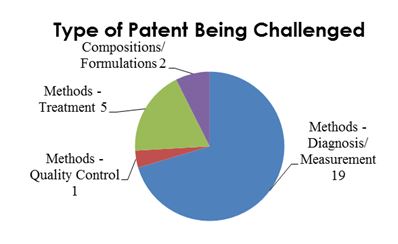 District courts sometimes reached apparently contradictory decisions regarding patent eligibility in cases involving similar patent types. This could be due to evolving jurisprudence. Nonetheless, in some instances, different judges have issued seemingly contradictory rulings within months of each other, even in the absence of substantial changes § 101 in jurisprudence. Some notable examples include:

No patent directed to DNA isolated from a naturally occurring source has withstood a § 101 challenge in district court in the wake of the Supreme Court’s Myriad decision (which found that merely excising DNA from its natural source does not sufficiently transform the DNA).[29] However, two district courts have offered some hope for patent eligibility of isolated protein fragments. In Rutgers v. Qiagen[30] and Oxford Immunotec v. Qiagen,[31] both district courts acknowledged that the claimed protein fragments could have different physical and chemical properties from the naturally occurring full length protein.[32] The defendants’ 12(b)(6) motions were denied because there was a genuine dispute of material fact as to whether the protein fragments at issue were “natural phenomena.” In neither case was this issue addressed after trial.[33] These decisions suggest that claims directed to isolated protein fragments, or to methods of using those proteins fragments, may be distinguished from claims directed to isolated DNA and therefore be patent-eligible.

District court decisions also show heterogeneity regarding the application of step two of the Mayo/Alice Test. Some district courts appear to borrow from obviousness jurisprudence to determine whether a patent contains an “inventive concept,” sometimes to the detriment to the patentee, as in Sequenom,[34] where the methods used to detect cffDNA were characterized as “conventional, routine, and well understood applications in the art.”[35] On the other hand, several district courts have invoked obviousness principles such as “teaching away” to rule in favor of the patentee. For example, a patent for measuring urine drug levels while accounting for patient hydration was upheld because, at the time of invention, the inventors “cut against scientific thought.”[36] The court specifically concluded that the art taught away from using the specific steps claimed.[37]

Some district court seem to recognize that using publicly available methods that were not “well understood, routine, [or] conventional”[38] may satisfy the “inventive concept” requirement. In one case, a defendant’s 12(b)(6) motion was denied because, among other reasons, there was a factual dispute about whether the patented technique of radiolabeling a protein targeted by autoantibodies in patients with myasthenia gravis was sufficiently widely used as to be “routine or conventional.”[39]

In another case,[40] most of a patentee’s claims directed to methods of measuring forehead temperature using a mathematical formula to estimate core body temperature were ruled invalid on summary judgment. However, certain claims with a greater level of specificity were found to include an inventive concept. This court indicated that the evidence did not show that the recited technique had become so prevalent as to become routine or conventional.[41]

In at least one district court decision, the fact that a patent issued after Mayo and Myriad bolstered the patentee’s argument that the lawsuit should not be dismissed.[42] Although this was not the primary basis for the court’s ruling, it offers some encouragement to patent owners. It remains to be seen whether other judges will take into consideration whether the patent-in-suit was allowed post-Myriad.

Although patent eligibility standards have been significantly debated since the 2012 Mayo decision, they may be gradually refined and clarified. Nevertheless, many stakeholders have argued that legislative action is needed to prevent decades of uncertainty.[43] This year, three separate organizations have published proposals to amend the text of 35 U.S.C. § 101: the American Intellectual Property Law Association,[44] the Intellectual Property Owners Association,[45] and the Intellectual Property Law section of the American Bar Association.[46] These proposals aim to reverse recent jurisprudence and clarify the scope of eligible subject matter. To date, no relevant bill has been introduced into Congress,[47] and Congress has held no hearings regarding any of these proposals.

The three proposals have slight differences but contain key commonalities: All three proposals seek to eliminate — or at least minimize — discretion by the U.S. Patent and Trademark Office or the courts as they evaluate patent eligibility, and restrict the exceptions to subject matter eligibility to those subsequently enumerated in the proposed statute, requiring the issuance of a patent if all the statutory requirements are met. And to prevent parsing a claim’s limitations into eligible and ineligible elements, which can lead to the conclusion that the eligible elements are not sufficiently transformative, all three proposals emphasize that subject matter eligibility of a claim is to be determined based on each claim as a whole. Notably, the AIPLA and IPO proposals would permit “any human contribution [including, for example, administering a drug] to meet the eligibility requirement.”[48] And, the AIPLA and IPO proposals specify that only claims that “can be performed” or “exist[]” solely in the human mind are ineligible as “abstract ideas.” Such amendments arguably would provide eligibility for patents requiring any device or physical actions, such as performing a diagnostic test. Notwithstanding significant support in the biotech industry for amending § 101, it remains to be seen whether Congress will consider and effectuate such change in the near future.

Though § 101 jurisprudence in the life sciences continues to evolve, our review suggests that:

While cases such as CellzDirect offer a sliver of hope to patent owners, district courts’ treatment of patent claims under § 101 will likely continue to leave many patent owners hoping for a legislative solution.

Jaume M. Canaves is an associate at Sterne Kessler.