These Firms Racked Up The Most Patent Work Last Decade

Law360 (February 27, 2020, 6:53 PM EST) -- A three-attorney Delaware firm and an IP giant dominated patent litigation in district court from 2010 to 2019, and IP boutiques held all three of the top spots on the list of firms handling the most work at the Patent Trial and Appeal Board since its inception.

Delaware-based Stamoulis & Weinblatt LLC led the pack for firms representing plaintiffs in district court litigation by a wide margin, filing 2,074 cases in 21 districts in the past decade, according to a new report from Lex Machina. California-based Russ August & Kabat clocked in second for plaintiff firms with 1,439 cases. 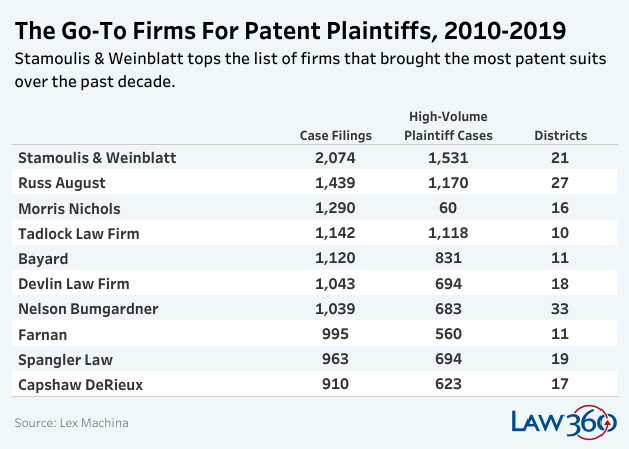 Stamoulis & Weinblatt, no stranger to handling a high volume of patent cases, has appeared atop Lex Machina’s lists of most active firms for patent plaintiffs for several years.

Attorney Stamatios Stamoulis told Law360 the firm can handle such a high volume of cases because of the attorneys' extensive patent experience and deep familiarity with the Delaware federal court, which has supplanted the Eastern District of Texas as the nation’s busiest patent docket.

All three attorneys cut their teeth at IP powerhouse Fish & Richardson PC, which has a reputation for practicing in a dizzying array of districts and venues.

“We’d all been there for years … and when out-of-state firms are looking for someone to partner with to be local counsel in Delaware, we are an obvious choice because we are well-versed there,” Stamoulis said. “We can handle both the substance and the procedural pieces.”

Fish & Richardson came in first for the most defensive patent work last decade, representing defendants in 1,824 cases. The firm also topped Lex Machina’s list of firms handling the most trials at the U.S. Patent Trial and Appeal Board, appearing 1,048 times since the board was created under the America Invents Act in 2012.

Fish & Richardson’s litigation practice group leader Kurt Glitzenstein told Law360 that no single factor can explain the firm’s ability to dominate both arenas. But one thing that helps is its winning record.

“In part, we’re in high demand because we win,” Glitzenstein said.

With 13 wins in district court, 13 wins at the Federal Circuit and four wins at the International Trade Commission last year alone, plus more than 100 attorneys with Ph.D.s and a deep bench of law clerks, the firm is primed to offer clients an appealing blend of technical, legal and industry expertise in all venues, according to Glitzenstein.

“Our clients are very sophisticated and understand the importance of legal expertise. But I’ve also seen that our technical expertise is a big reason why clients feel very comfortable with us, both in district court and at the PTAB,” he said.

Morris Nichols Arsht & Tunnell LLP, a Delaware firm, ranked second on the defense side, representing 1,557 defendants, while also coming in as the third most active firm on the plaintiffs side, with 1,290 cases handled over the last decade.

The bulk of Morris Nichols’ work — a whopping 77% — involved representing brand-name drug companies in infringement litigation against generics makers, according to the Lex Machina data.

With Texas still being a strong draw for patent suits, the Lone Star state saw two of its firms — Gillam Smith LLP and Potter Minton — in the top five list of most active firms for defendants, followed by Delaware-based Potter Anderson & Corroon LLP.

The district courts weren't the only place where IP boutiques could show off their dominance over the past decade. The establishment of the Patent Trial and Appeal Board, a new forum in 2012 at the U.S. Patent and Trademark Office, helped cement their reputations as the go-to firms for patent litigation.

Though there were a lot of new details to work out and strategies to test at the fledgling forum, these boutiques found a way to keep up and keep luring clients, landing three of them at the top of Lex Machina’s list of the most active firms at the PTAB from 2012 to 2019. 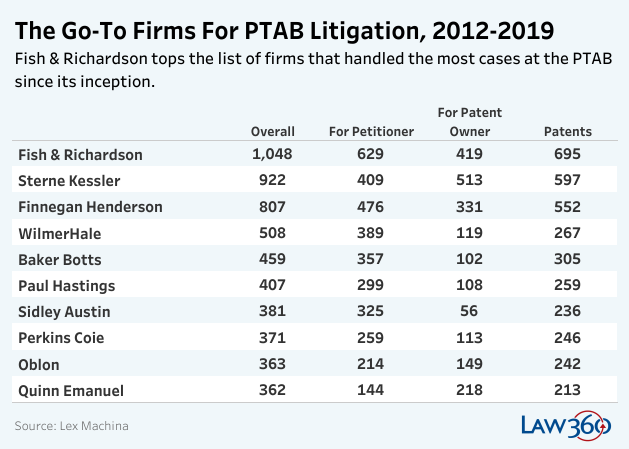 Michael Specht, co-chair of Sterne Kessler’s patent office litigation practice, told Law360 that clients are drawn to the firm’s ability to keep up with changes at the PTAB, such as precedential decisions and trial practice guide updates.

"You have to be extraordinarily nimble to play in this forum. You can’t get wedded to what you did two, three years ago or even six months ago. You have to be agile and adapt accordingly,” Specht said, adding that the firm invests a lot in training and staying abreast of PTAB developments.

One area this year where the ability to adapt was key was the board’s increasing use of its discretion to deny petitions, Specht said. In May, the board designated two decisions as precedential that solidified the view that challenges don’t need to be filed by the same company in order to be labeled “serial attacks.”

“Being able to appreciate how the board was making those decisions allowed us to adapt and reflect that when working with petitioners,” Specht said. “And on the patent owner side, we're able to identify where there might be weaknesses in a petition.”