From Military To Law: What Attys Took From Their Service

Law360 (November 9, 2020, 3:48 PM EST) -- Trying to put on a mask after being hit with tear gas, being in a submarine at 1,000 feet under the sea, caring for soldiers wounded by bombs during the Vietnam War: These experiences from the U.S. military taught veterans crucial lessons and traits that they continue to apply to their careers as practicing lawyers.

Law360 asked attorneys who have served in the military to share their experiences ahead of Veterans Day on Nov. 11. We received about 170 emailed submissions from lawyers, ranging from associates to managing partners and counsel who work at shops of all sizes, from boutiques to BigLaw.

In their responses, attorneys told anecdotes from their service in different branches of the military that shared common lessons of discipline, attention to detail, perseverance, empathy and perspective.

Overall, their responses indicated that their legal careers have benefitted from the rigor of their military service because they learned how to thrive under pressure.

"When you've had to crawl under live fire or attempted to don a gas mask when your skin is burning from tear gas, you see things from a very different perspective," Kathlene Burke, who served in the U.S. Army from 1997 to 2001, said in her response.

Now as an associate at Skadden Arps Slate Meagher & Flom LLP, she acknowledged that her responsibilities as a restructuring lawyer can be "intense." But she tries to keep that feeling in perspective.

"I have often thought back and reminded myself that at least no one is shooting at me," she said.

Similarly, DLA Piper's Richard Hans, managing partner for the New York office, said being inside a submarine at 1,000 feet below the ocean's surface continues to remind him to pay attention to detail and realize the significance of each person's role.

"That experience was and continues to be invaluable … especially sitting in a management position during a pandemic, working to maintain the cohesion of our teams and office and providing the motivation needed to press forward," said Hans, who served in the U.S. Navy for five years beginning in 1983. 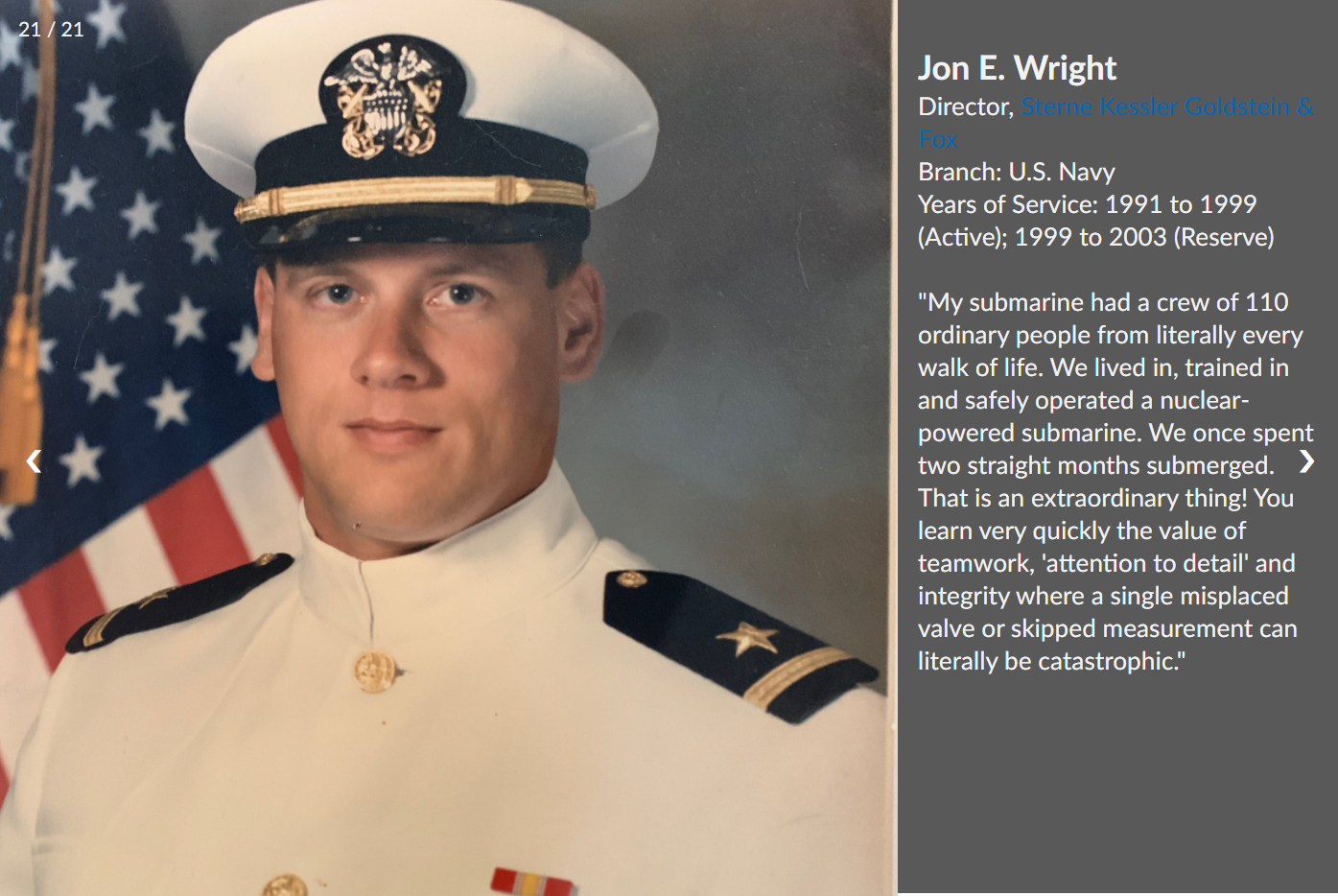 "They are always some of the hardest working lawyers we have, some of our biggest rainmakers," he told Law360. "Certainly in this day and age during COVID, you want some grit and some toughness and some fight in your lawyers, and our veterans step up every day."

In her submission, one veteran said her time as a public relations specialist in the Louisiana Army National Guard taught her how to work through tense situations.

"My work often puts me in mental situations in which success seems unlikely," said Destiny Washington, counsel at FordHarrison LLP who served in the Army from 1997 until 2005. "Although I may not always win, I always learn."

Even veterans' experiences during training presented them with invaluable lessons for their legal roles. Rumberger Kirk & Caldwell PA attorney Albert Li compared his U.S. Naval Special Warfare Command team training to law school and his work as an attorney.

"Everyone tells each other — the only easy day was yesterday — because the training leads you through endless days of being wet, sandy and cold, and you need to be prepared for the challenges the next day will bring you," said Li, who deployed to Southeast Asia and East Africa between 2002 and 2006.

He added, "Lawyers need mental toughness and humility because we all know that as great as the court wins and success days are, the road there is full of unexpected pitfalls and stumbling blocks."

Meanwhile, Gabrielle Morlock said the core values of the U.S. Air Force — "integrity first, service before self and excellence in all we do" — describe her goals.

"To always do the right thing, even when no one is around to see it," she said, adding that as an attorney at Snell & Wilmer LLP, "I strive to always do what is right, to put others before myself and to always do my best and exude excellence in everything I do."

Some veterans credited their military experience with inspiring their decision to pursue a specific area of the law.

Littler Mendelson PC attorney Emily Haigh said her time advising commanders and trying cases as a federal prosecutor for gender-based crimes while she served as an Army Judge Advocate between 2011 and 2016 influenced her choice to focus on sexual harassment.

"I not only had the opportunity to represent victims and those accused, I also served as a magistrate judge for a brief period, and as an administrative law attorney in charge of reviewing internal investigations," she said in her submission.

And other veterans shared how they've never let go of their notion of service. Albert Dandridge III said his time in the U.S. Marine Corps pushed him as Philadelphia Bar Association chancellor in 2015 to sponsor shelters for displaced veterans and help veterans obtain their federal benefits.

It also shaped him to act more directly and openly as chief diversity officer and chair of the securities practice at Schnader Harrison Segal & Lewis LLP.

"In combat I learned that bad information or lack of information gets people killed," said Dandridge, who spent two tours of combat duty in Vietnam between 1963 and 1970. "Thus, my style in practicing law is to tell everyone what is going on so they have as much information as possible."

Taylor at Duane Morris pointed out the ongoing service element that he witnesses in some of his firm's veterans.

"Veterans can't do enough for the cause of your firm. They understand the cause of the firm, they want to contribute to the cause," he said. "Their nature is just to serve, and not only to paying clients but clients in need on a pro bono basis."

One of the largest segments of Duane Morris' pro bono program focuses on supporting veterans, Taylor said. He specifically credited Christopher Tyson, a firm partner who served in the Navy from 1999 until 2007, for his pro bono work.

Separately, Tyson in his submission to Law360 highlighted his passion for helping underserved people in his community.

"From my experience, I know that when someone in the military puts their life on the line for us, then when they come home, it is critically important that we be on the front lines for them," he said.

He added that the novel coronavirus pandemic caused Duane Morris to temporarily shut down a weekly legal clinic at a veterans medical center in Washington, D.C., but that the attorneys have successfully transitioned to a virtual platform to serve veterans in the country's capital, as well as in Maryland and Virginia.

Meanwhile at Dykema Gossett PLLC, senior counsel Phylis Speedlin has continued to care for others during her law career, following her service in the Army Nurse Corp. for three years starting in 1970. She told Law360 that she co-founded the first pro bono clinic under the San Antonio Bar Association's Community Justice Program in May 2010.

One day that month, volunteer attorneys traveled to a veterans hospital in San Antonio to give legal advice to more than 45 veterans on topics ranging from wills to property law. More than 20 qualified veterans who sought legal services that day were scheduled for a future clinic, Speedlin said.

Ultimately, the perspective they gained during their service stands out the most for other veterans. Despite the long hours, stress and burnout that can accompany life at a law firm, K. Lee Blalack II — a partner at O'Melveny & Myers LLP who trained in South Carolina and served with the Marine Corps during the Persian Gulf War — put that reality into perspective for his peers.

"Compared to boot camp at Parris Island," he said, "life as a lawyer is a piece of cake."