IP Boutiques Tick Down As AIA Settles In

Law360 (April 15, 2018, 10:02 PM EDT) -- Amid years of attorney migration between intellectual property boutiques and their general practice rivals, the IP specialists saw a slight downtick in 2017, as these firms continued to adjust to practicing under the America Invents Act.

The decline in attorney headcount was not dramatic — on average, it was slightly more than 1 percent — but it was fairly consistent, according to the latest Law360 400, which ranks the largest U.S. firms by attorney headcount. Six of the nation’s 10 largest IP boutiques saw some degree of contraction among their ranks in 2017.

Harness Dickey & Pierce PLC was one of two firms to buck the trend, reporting an increase of 1.7 percent in its overall headcount. Schwegman Lundberg & Woessner PA also did not see a decrease, remaining at a steady level as compared to 2016. 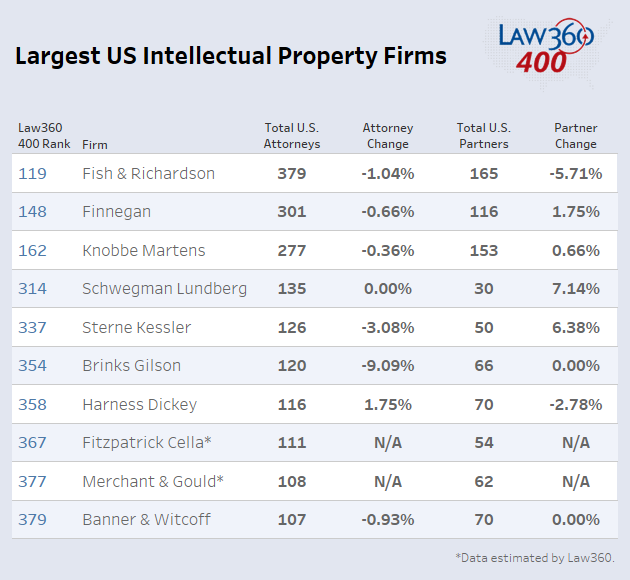 The contraction follows a one-year stretch during which the largest IP boutiques saw a collective uptick in the number of attorneys working at their firms, rebounding from a downward trend that came in the wake of the 2008 economic downturn.

“I think in the last couple of years what you’ve seen is the firms are settling into what’s a good, healthy, steady state for them,” said Mark Sweet, the managing partner of Finnegan Henderson Farabow Garrett & Dunner LLP.

Fish & Richardson PC retained its title as the nation’s largest IP boutique with 379 attorneys at year’s end. This was almost identical to its 2016 number, although the firm reported a 6 percent decrease in the number of partners, which dipped to 165.

Peter Devlin, the president and CEO of Fish & Richardson, said the change in partners was primarily the result of the departure of a group of attorneys in Fish’s commercial litigation practice in Dallas who went to Winston & Strawn LLP.

“The attorneys who left were part of the firm’s expansion beyond IP and high-tech litigation into general commercial work,” Devlin said. “Those departures had no impact on Fish’s core IP practices, where we had an outstanding year both in terms of volume of work and winning results.”

Right behind Fish & Richardson on the list was Finnegan, which reported 301 attorneys. Knobbe Martens held onto its spot at No. 3. Both firms saw their overall headcounts down an attorney or two, even as their partnership number ticked up slightly.

Sterne Kessler Goldstein & Fox PLLC leapfrogged Brinks Gilson Lione to join Schwegman Lundberg in rounding out the top five. Brinks Gilson reported the largest percentage change in 2017 in the number of attorneys, down just over 9 percent. Representatives for Brinks Gilson did not respond to a request for comment for this article.

There were no new boutiques to make the top 10 list.

“It’s not terribly surprising that those changes have stabilized at this point and that we’re seeing more stability in patent boutiques,” said Natasha Innocenti, a partner at legal recruiting firm Mlegal Group.

Headcount is directly tied to business growth, firm leaders said, which has been relatively slow. One pressure point for some IP boutiques has been the decline in patent litigation, which has fallen more than 25 percent from 2012 to 2017, according to data from Lex Machina.

Three boutiques, in particular — Finnegan, Fish & Richardson and Fitzpatrick — have had success in securing the work that is out there, landing among the most active law firms in 2017 in terms of representing plaintiffs in district court patent litigation, Lex Machina data shows.

Fish & Richardson was also No. 1 in defending patent cases — the only boutique to crack the top 10 on the defense side. The firm, along with Finnegan, was also among those to make the most appearances at the Federal Circuit last year, each appearing in more than 20 cases.

The drop in litigation can be attributed to a number of factors, including the 2011 passage of the America Invents Act. The AIA created a new review system for challenging the validity of patents, keeping more of these types of disputes out of federal court.

But as the dust settles after the AIA’s enactment, boutiques have a better understanding of how the changes the law brought to patent litigation affect the firms and their clients, firm leaders say.

Michael Brennan, a principal at Harness Dickey, said this was one factor in the firm growing more than 10 percent over the past three years. The other, he said, was confidence in the economy.

“Like any other business, we react to that in terms of our confidence to try to grow,” he said.

IP boutiques have been well represented in AIA reviews, which perhaps is not surprising. With their mix of patent litigators and lawyers handling the prosecution of patent applications, IP boutiques were in a unique position to respond to the review system, Brennan said.

“If you have folks who clearly get the prosecution process and have them team up with folks who have the litigation skills and the advocacy skills, it’s a great combination,” he said.

Three firms — Finnegan, Fish & Richardson and Sterne Kessler — have been an especially dominant force representing litigants in AIA reviews. They are the top three firms on both the petitioner and patent owner sides over the history of the proceedings, Lex Machina data shows.

Michael Ray, the managing director of Sterne Kessler, said the firm’s litigation practice and patent prosecution practice benefit each other. Lessons learned in prosecution, for example, can help when analyzing the validity of other companies’ patents.

“The economics of those practices are also really different, and they complement one another very well,” he said.

The U.S. Supreme Court is currently considering a case that challenges whether the AIA’s inter partes reviews violate the Constitution. The justices heard arguments in the case, Oil States v. Greene’s Energy, last fall and are expected to reach a decision before June.

Should the Supreme Court find IPRs unconstitutional, it could upend the entire AIA review system.

Ray said this would send more validity disputes back to district court, which could translate into an increase in litigation work. It could also increase the value of patents because it is more difficult to invalidate patents in district court, as compared with AIA reviews, he said.

On the other hand, if the justices uphold the reviews and preserve the status quo, Ray said that IP boutiques will continue to be highly sought after by companies involved with IPRs and other AIA reviews.

“Either way, I think the patent boutiques have a very strong practice,” he said.

Budgeting and price pressures have been an issue that law firms have been forced to contend with in the wake of the 2008 economic downturn. There is increased pressure on firms to continue to become more efficient and reduce the cost of delivering legal services.

“I think many patent boutiques are in the process of reengineering how they deliver services,” Ray said.

Sterne Kessler has, among other things, flowcharted the entire patent prosecution process, looking for areas where efficiency could be improved. At Finnegan, the firm has modernized its internal processing, relying on new technologies for things such as docket management systems.

Many IP boutiques have also responded to the pressures by embracing creative pricing models. Devlin, of Fish & Richardson, said roughly 30 percent of the firm’s revenue is from alternative fee arrangements, which can include contingency or fixed-fee work.

One added pressure, according to some, could be the recent decline in law school admissions. Law schools are seeing fewer scientists and engineers, Ray said, which makes it increasingly difficult for firms to find people to fill entry and midlevel positions.

Still, firm leaders are confident that boutiques will continue to have a place in the IP landscape. There are also indications that some of these firms are planning to maintain their current size, at least for the near future. At Finnegan, Sweet said, the incoming class of summer associates was the same size as last year.

“When we do our summer associate program, we’re crystal-balling two years out the number of attorneys we are going to be hiring for the firm,” he said. “But as with all firms too, if there’s an influx of work that put us in a position where we need to bump up hiring, we certainly would do that.”

Methodology: Law360 surveyed U.S. law firms, and vereins with a U.S. component, on domestic attorney and partner headcount information as of Dec. 31, 2017. Firms based outside the U.S. were not surveyed, and only attorneys based in the 50 states and the District of Columbia were included in the responses. Firms that have shareholders, members or principals in lieu of partners have those numbers listed in the “partner” field.

Correction: An earlier version of the story misidentified the legal recruiting firm Natasha Innocenti works with. The error has been corrected.