How Patent Litigation Changed In 2019

The number of new cases filed in U.S. district court remained stable from 2018, according to a new year-in-review report from Lex Machina. The number of cases filed by high-volume plaintiffs continued to tick downward, after a frenzy of activity in 2013 and 2015.

The Patent Trial and Appeal Board saw the number of petitions filed in that relatively young forum slow in 2019, as filers weighed the impact of new policies there.

Patent litigants have seen enormous change in the form of patent reforms pushed through by the America Invents Act in 2012, as well as U.S. Supreme Court rulings like TC Heartland LLC v. Kraft Foods Group Brands LLC, which shifted where litigants could choose to file cases, and Alice Corp. v. CLS Bank International, which put limits on patent eligibility.

But while 2019 was still rife with eye-catching rulings and policy shifts, patent litigants seemed ready to find a new groove after a decade of upheaval.

Patent case filings leveled off in 2019, with district courts seeing essentially the same number of cases they did in 2018, after two eye-popping peaks in 2013 and 2015.

A total of 3,588 patent cases were filed in district courts last year, according to Lex Machina’s new report, only a few shy of 2018’s total. 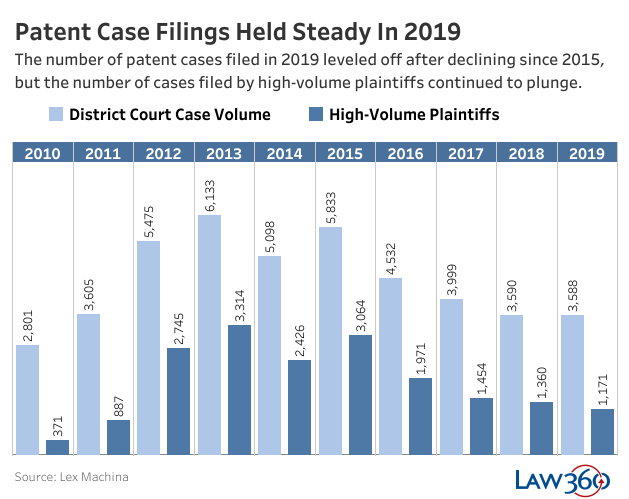 While many forces have affected the level of litigation over the past few years, at least some of the leveling off in patent litigation volume can be chalked up to the ongoing impact of the high court's Alice ruling, which created lingering uncertainty about what can be patented.

“I don’t feel like we’ve reached a point of clarity yet in terms of patent eligibility,” said Jonathan Kagan, partner at Irell & Manella LLP. “That’s one thing that does affect filings, and may essentially bring down the value of a certain number of patents, and therefore brings down the number of cases that are filed.”

Cases filed by high volume plaintiffs also continued to sink in 2019, with a 14% drop-off in the number of cases filed from 2018.

The drop in activity from high-volume plaintiffs, and the leveling off of patent litigation volume overall, may suggest that patent litigation is becoming more focused on high-quality patents. Much of the spike in patent litigation in the middle part of the past decade centered on less potent patents fired off against a wide range of defendants, but that trend has begun to shift as parties wielding those patents find it harder to gain traction.

“So litigation, while it may overall be slightly down, I think the quality of the assets being asserted is actually higher,” said Alfred Fabricant, partner at Brown Rudnick LLP.

Even though activity from high-volume plaintiffs has been on the decline, those filers still launched more than 30% of all district court cases last year, according to Lex Machina’s report.

In 2019, the plaintiffs filing the most patent suits in district court included some familiar names, such as Uniloc, a longtime high-frequency filer asserting a portfolio of patents covering data processing, messaging, wireless communications and remote device management, among others. The company hit Apple, Microsoft, Samsung and other tech firms in 2019 with suits alleging violations of Uniloc patents.

Some fresh faces made the top five list this year as well, including Cedar Lane Technologies and Lighthouse Consulting Group.

Cedar Lane targeted firms like Zoom Video Communications over its use of interactive application technology and Frontier Communications over playback technology, filing suits in a wide range of venues from Delaware to California, Texas and Illinois. Lighthouse Consulting fired off lawsuits, mostly in Texas district courts, against firms such as Bank of America and Morgan Stanley over remote bank deposit technology.

The Patent Trial and Appeal Board, formed as part of the patent reforms launched by the America Invents Act in 2012, also saw a slowdown in petitions in 2019, after a series of rulings that changed strategies for petitioners.

The drop is particularly noticeable from the fourth quarter of 2018 to the first quarter of 2019, as petitioners began to hold their fire in the wake of several shifts at the board, including a change in the claim construction standard in use at the forum, and a new policy intended to limit petitioners from filing multiple challenges to the same patent.

In addition, the board created a new path for precedential decisions, a change in practice that is also likely having an impact.

“When you put all of those things together, it has resulted in fewer PTAB proceedings,” Fabricant said. 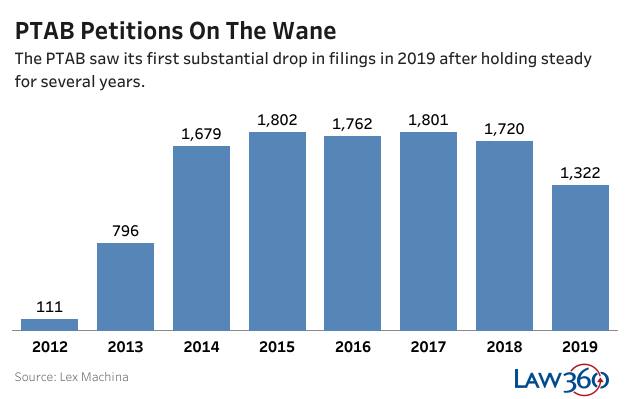 Despite declines in overall case volume at the PTAB and some stagnation in case volume at popular district courts, law firms are finding ways to dominate those venues and navigate the shifting legal landscape to secure clients.

Firms with Delaware expertise dominate the rankings of the busiest plaintiffs firms, as that state steps into the spotlight as a preferred venue for many patent plaintiffs in the wake of the high court’s ruling in TC Heartland.

Devlin Law Firm, a consistent presence in rankings of the most active firms for patent plaintiffs, tops Lex Machina’s list for 2019 with a mix of local counsel and lead counsel work, with fellow Delaware-based firm Stamoulis & Weinblatt LLC not far behind.

Ohio-based Sand Sebolt & Wenow LPA jumped into the upper ranks of the list this year with representations on behalf of patent plaintiffs including Wave Linx LLC and Blueprint IP Solutions LLC, as well as Symbology Innovations.

Fish & Richardson PC, a firm that frequently leads the most active law firms in patent litigation, topped Lex Machina’s list of law firms most frequently representing defendants fending off patent lawsuits in federal district court in 2019. The intellectual property boutique was tapped as defense counsel in 179 lawsuits filed in more than 24 different districts in 2019.

The firm was followed by Morris Nichols Arsht & Tunnell LLP with 101 representations and Gillam Smith LLP with 88, with DLA Piper and Richards Layton & Finger PA rounding out the top five. 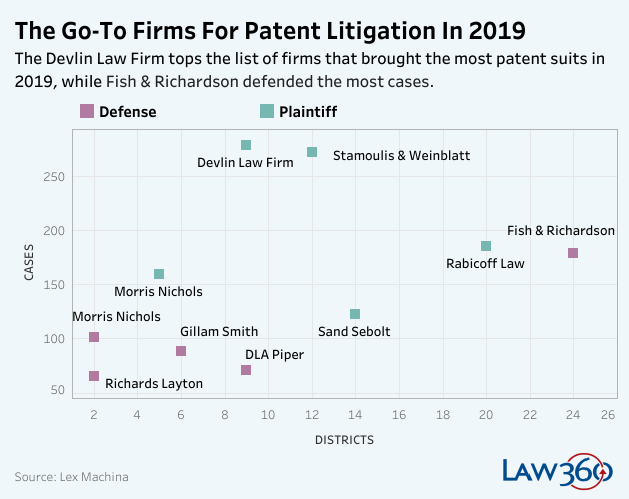 Fish & Richardson also came out on top of Lex Machina’s list of the most active law firms for petitioners at the PTAB in 2019, with 80 representations, closely followed by full-service law firm Paul Hastings LLP with 79. Two other IP boutiques, Sterne Kessler Goldstein & Fox PLLC and Finnegan Henderson Farabow Garrett & Dunner LLP were close behind with 67 and 62 representations, respectively.

Etheridge Law Group came out on top of Lex Machina’s list of most active firms for patent owners on petitions filed in 2019, with 69 cases, besting Skiermont Derby LLP with 48 and Sterne Kessler with 43, closely followed by Fish & Richardson with 40 cases.

For these law firms, even if the total volume of patent litigation has fallen over the past year, the lingering impact of powerful patent reforms and blockbuster rulings, and the ongoing questions they raise, are keeping the lawyers who handle these cases busy.