(October 27, 2021, 5:27 PM EDT) -- The rate at which the Patent Trial and Appeal Board uses its discretion to deny patent reviews under the precedential Fintiv decision declined over the last six months, a drop that attorneys largely attribute to the board giving less weight to the trial date in parallel infringement litigation and petitioners growing more comfortable with stipulations.

The PTAB's Fintiv decision, which was issued in March 2020 and became precedential in May of that year, laid out six factors the board must consider when deciding whether to use its discretion not to review patents involved in district court suits. These include weighing the proximity of the trial date in parallel litigation and the overlap of issues between the two venues.

As the board began citing Fintiv to deny patent reviews, critics have brought litigation claiming the decision keeps too many patents from getting reviewed at the PTAB and thwarts the board's purpose of providing a cheaper and faster forum for deciding validity issues. However, the PTAB's rate of denying patent reviews under Fintiv has slowed over the last two quarters of fiscal year 2021, according to data Law360 obtained from Unified Patents, a member-based organization working to deter abusive patent assertions.

From April through September, the board denied inter partes review in just 19% of cases in which it did a Fintiv analysis. That's in contrast to the prior six months — the first half of fiscal year 2021 — when it denied IPR 38% of the time.

In total, Law360 reviewed 499 institution decisions citing Fintiv between May 2020 through September 2021. The board granted IPR in 350 cases and denied review in 149 cases. Overall, the board has denied IPR in 30% of cases involving Fintiv since it became precedential. 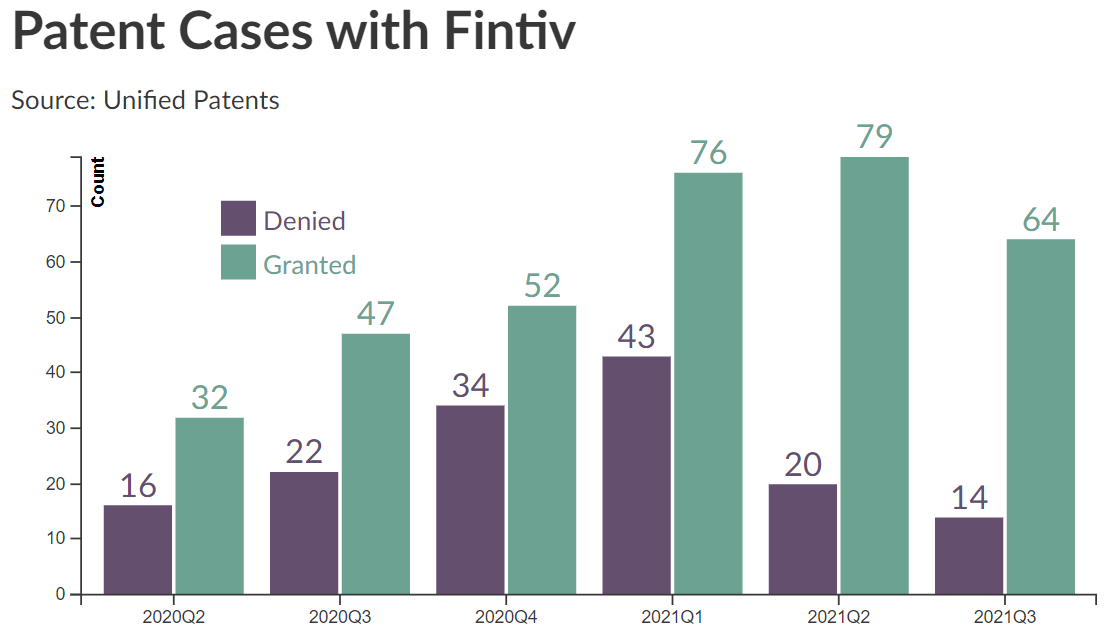 Fintiv denials "are down substantially" for several reasons, according to Tim Fink, a former vice chief administrative PTAB judge who was on the panel in the Fintiv proceeding.

"The most significant [reason is] that petitioners have adapted to Fintiv by filing petitions much earlier after being served with a complaint, and the board [is] noting this and crediting petitioner diligence," said Fink, who is now a partner at O'Melveny & Myers LLP.

A U.S. Patent and Trademark Office representative said the agency can't comment on third-party analyses or external methodologies involving institution decisions, but "we can confirm via our own assessment that there has been a recent dropoff in Fintiv denials."

The Fintiv order expanded on a 2018 decision called NHK Spring, which said denial is favored when district court infringement trials will end before the PTAB can issue a decision. Together, they are commonly referred to as the Fintiv rule.

Apple, Google, Intel and Cisco have lodged a court challenge in California, asserting the policy is unlawful and makes it all but impossible to get patents reviewed at the PTAB.

One complaint critics have is that the trial dates the board bases its institution decisions on under the second Fintiv factor often get delayed after the fact. That happened in the Fintiv case itself. When the board denied Apple's petition for IPR of Fintiv's mobile wallet patent in May 2020, the parallel infringement suit in Texas was scheduled to start in March 2021.

At the time, that was two months before the board's final decision was due, so the board said that slightly favored denial. Even though the Western District of Texas is considered a rocket docket because U.S. District Judge Alan Albright sets aggressive schedules, the trial date has since been pushed back several more times. Court filings show the trial will now start in January, about 10 months after the original date the board relied on to deny IPR.

While the PTAB largely denied IPRs when trial dates were before or near the due date for the board's final decision initially, it has become more willing to grant IPR in those cases.

Naveen Modi of Paul Hastings told Law360 the board is analyzing trial dates more critically now, and that could partly explain the drop in Fintiv denials.

"The board used to just accept trial dates at face value. But I think the board has realized that trial dates do move. Even if you have a trial date that's aggressive, it may not stick," Modi said.

While the board seems to have refined its trial date analysis, the shift also could be driven by the scrutiny the Fintiv policy has been receiving from litigants and lawmakers, according to Richard M. Bemben of Sterne Kessler Goldstein & Fox PLLC.

The U.S. Patent and Trademark Office sought public comment on the Fintiv rule and received more than 800 sharply divided comments in December.

The Association for Accessible Medicines, a group that represents the generics and biosimilars industries, said codifying the Fintiv decision would make it harder for petitioners to efficiently challenge competitionstifling patents, which it said would drive up drug prices. Meanwhile, the Biotechnology Innovation Organization said getting rid of the Fintiv factors would encourage duplicative and redundant litigation.

In addition to the tech giants' legal challenge to the Fintiv rule, Sen. Patrick Leahy, D-Vt., introduced legislation in September that would end it.

"I think that the board is obviously watching what's happening outside of the PTO, and when they do apply Fintiv, trying to make sure they're analyzing all the facts and getting it right at the institution decision," Bemben told Law360 for this story. "I think what we've seen from the board decisions is that they really are scrutinizing that second factor and investigating whether the trial date is firm."

One other factor attorneys said may be turning the tide is the use of stipulations, where petitioners agree to not pursue the same invalidity arguments in district court if the PTAB grants IPR. The board expressed concerns in the Fintiv decision about "inefficiency and duplication of efforts," saying that when petitioners present the same invalidity arguments and evidence in both venues, that favors denial.

The first stipulation came in April 2020 from petitioner Sand Revolution II LLC, which said it wouldn't pursue the same invalidity arguments in an ongoing district court case from Continental Intermodal Group Trucking LLC. A split panel initially denied institution under NHK Spring that February, but it ordered further briefing on the matter and ended up instituting IPR in June 2020, noting that the stipulation weighed marginally in favor of a review grant.

Modi, who helped represent Sand Revolution, said his client thought at the time that offering a stipulation could ease the board's concerns about overlap.

"We were thinking, 'What is the reason behind Fintiv?' The board wanted to decrease the overlap in the issues being litigated at the PTAB versus the district court. So we thought it would be useful to do the stipulation and see what the board does. Because ultimately it was in the spirit of what Fintiv was all about," Modi said.

A footnote in the Sand Revolution decision, however, said a broader stipulation not to pursue grounds that were raised or could have reasonably been raised at the PTAB "might have tipped this factor more conclusively" in Sand Revolution's favor.

Although risky for petitioners, the stronger stipulation the board hinted at in Sand Revolution came in the Sotera case, where the board said in a December 2020 decision that it weighed strongly in favor of granting IPR. The PTAB designated Sotera as precedential a few weeks later.

Sotera was designated as precedential "to put a pretty heavy thumb on the scale of not denying institution because of an earlier trial date," according to Fink, the former vice chief administrative PTAB judge. He said such a stipulation helps ensure that the PTAB is being used as a true alternative to district court litigation.

Petitioners are getting more accustomed to using prior art stipulations to successfully avoid denials, even when the parallel district court litigation is brought in rocket dockets, according to Fink.

"There are some district courts where no matter how fast you file an IPR, you're going to get a much earlier trial date. And the Sotera stipulation has been effective at getting institution even in those cases," Fink said.

As the case law around stipulations has developed, it's become more evident what type of stipulation to use and when, according to Fish & Richardson PC partner Karl Renner. The closer the trial date is to the board's final decision, the broader the stipulation needed to ensure consideration on the merits.

"In the beginning, it just wasn't clear. Petitioners, lacking confidence that stipulations would encourage institution, were reticent to forgo through stipulation their litigation defenses, and many were denied institution as a result. Petitioners have since gained an understanding — [though] they don't necessarily like it — of how to find the balance the PTAB wants," Renner said.

The recent drop in Fintiv denials, however, might not be enough to ensure that the policy survives in light of potential rulemaking by the USPTO and the pending legal challenge by the tech companies. And the decrease in such denials likely won't ease concerns by those opposed to the policy, according to Bemben, the Sterne Kessler attorney.

"Given the strong reactions Fintiv has provoked — both for and against — and the effort those challenging Fintiv have expended, I do not expect that the board's current trend, if continued, would satisfy the parties challenging Fintiv," he said.

Methodology: Unified Patents maintains its own internal database containing data aggregated from the USPTO, and it identified the universe of Fintiv institution decisions with a word search. Law360 manually examined each decision and removed any that were not decided based on a Fintiv analysis.