On March 15, 2019, the United States Patent and Trademark Office (USPTO) launched a pilot program that implements significant changes to motion to amend practice in AIA trials.  The Office states that its goal in proposing these changes is to “provide an improved amendment practice in AIA trials in a manner that is fair and balanced for all parties and stakeholders.”  Nonetheless, the changes strongly favor patent owners.  In particular, the major changes include (1) revamping the process to include optional “preliminary guidance” from the Board on the motion to amend, if requested by a patent owner, (2) permitting the patent owner to file a revised motion to amend following “preliminary guidance,” if requested, and a petitioner opposition,  and (3) confirming allocation of the burden of persuasion as to the unpatentability of proposed substitute claims to a petitioner.  The pilot program is based on the USPTO’s pilot program proposed in its October 29, 2018 request for comments with some modifications.  The pilot program applies to all AIA trial proceedings instituted on or after March 15, 2019.  The duration of the pilot program is indefinite with the USPTO noting that it will reassess the program in approximately one year and may terminate the program at any time depending on feedback and the program’s effectiveness. The pilot program published in the Federal Register on March 15, 2019 and is available here.

A patent owner now has the opportunity to file a revised MTA (rMTA) after receiving a petitioner’s opposition and/or after issuance of preliminary guidance(if requested). The Federal Register notice indicates that an rMTA may include one or more new proposed substitute claims in place of previously presented substitute claims. An rMTA  also may include substitute claims, arguments, or evidence previously presented in the original MTA, but may not incorporate any material by reference from the original MTA. An rMTA may provide new arguments and/or evidence as to why the rMTA meets statutory and regulatory requirements for an MTA, as well as arguments and evidence relevant to the patentability of pending substitute claims only in response to issues raised in the preliminary guidance and/or petitioner’s opposition to the MTA.  Preliminary guidance need not be requested to permit a patent owner to file an rMTA.

When the request for comments on the MTA pilot program was released in October 2018, nearly all commentators observed that they believed the process and timeline were unworkable.  In today’s notice, the USPTO notes that “[s]everal comments suggested that the Office should reconsider the timelines of due dates.”  The Office appears to address these concerns by making the pilot program entirely optional to patent owners.  That is, if a patent owner does not request a Preliminary Guidance or choose to file an rMTA, the motion to amend procedure will be largely the same as the existing motion to amend procedure.  To the extent that a patent owner chooses to file an rMTA, the timeline and process are dramatically different and place significant burdens on patent owners, petitioners, and Board panels.  While the timelines in the pilot program as launched are adjusted relative to the original timelines in the proposed pilot program, significant challenges managing the new due dates remain.

Under the pilot program, the initial MTA timeline remains largely unchanged—an MTA may be filed at the same time as the Patent Owner Response (twelve weeks after an institution decision) and a petitioner’s opposition is due at the same time as the Petitioner Reply or twelve weeks after filing of the motion. Patent owner’s reply to petitioner’s opposition and petitioner’s sur reply are now due in six weeks, which provides both patent owner and petitioner an extra two weeks from the prior MTA procedure.

If requested, the Patent Trial and Appeal Board (PTAB) will issue preliminary guidance on the MTA within four weeks of petitioner’s opposition.  If a patent owner chooses to file an rMTA, the rMTA must be filed within six weeks of the due date for petitioner’s opposition to the MTA. In this scenario the PTAB will issue a new scheduling order to accommodate the necessary additional briefing. Generally, the petitioner sur-reply to the rMTA will be due 1 week before the oral hearing, and the oral hearing will take place about 9 weeks before the 12-month statutory deadline for a final written decision.

The USPTO’s timeline for the scenario in which a patent owner requests preliminary guidance and files a revised MTA is reproduced below. 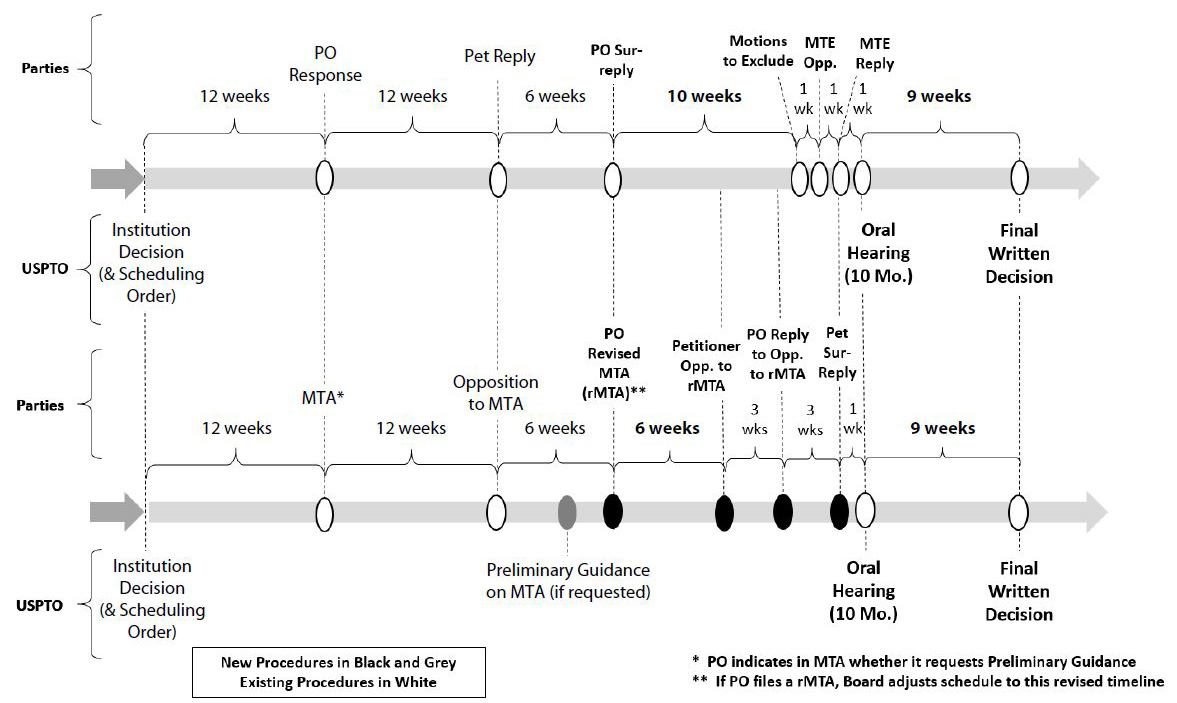 As highlighted by the timeline, this scenario places significant demands on patent owners, petitioners, and Board panels.  Specifically, the proposed procedure potentially gives a patent owner only two weeks to file an rMTA after receiving preliminary guidance. In addition, the additional briefing after the rMTA creates concurrent procedures with extremely tight deadlines, particularly when considering the need for expert declarations and depositions.